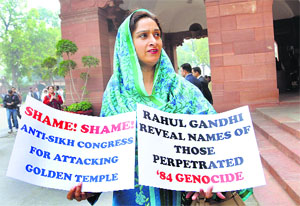 New Delhi: In the wake of steaming debate on UK’s advisory role in Operation Bluestar, the Akalis today upped the ante against the government demanding immediate de-classification of correspondence between the Indian and British Governments during that period.

The demand for making official documents public got shriller with Akali MPs in both Houses giving notices for adjournment motion to discuss the issue which they termed as one of “grave national importance.”

The notices given by Bathinda MP Harsimrat Badal in the Lok Sabha and Naresh Gujral in the Rajya Sabha could not be taken up as Houses were adjourned amid ruckus on several issues.

The Akalis, however, vowed to keep up the pressure on the Congress-led government saying the country must know whether the then Prime Minister Indira Gandhi sought the advice on the operation only from the UK or more nations.

With the BJP throwing its weight behind the Shiromani Akali Dal, the MPs of both parties said declassification of documents was equally important to reveal the real motive behind the operation.

Talking to The Tribune, Rajya Sabha MP Naresh Gujral said: “The documents declassified in the UK show the correspondence pertaining to the military offensive on the Golden Temple had been going on for at least six months before the actual attack took place. The entire operation was premeditated.

“We are seeking immediate declassification of official correspondence to know if the operation was actually a deep-rooted conspiracy to play the anti-Sikh card to give Congress an electoral advantage,” he said.

The Akali-BJP combine said it would continue to protest in Parliament.

“The anti-Sikh sentiment was being fanned by the Centre from 1982 when India organised the Asian Games. Every Sikh entering Delhi was searched at the border. No exception was made even for top military officers. We want to know why Jarnail Singh Bhindranwale was not arrested when he was at Mehta Chowk and later at Guru Nanak Niwas outside the Golden Temple in Amritsar,” said Gujral.

All Akali MPs said it was important to know what exactly went into the planning of the operation.

“The fact remains that the then PM did not even take Parliament into confidence over seeking foreign advice over an internal matter,” Gujral said.