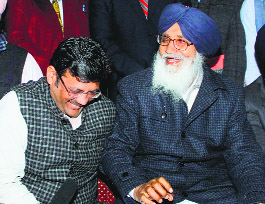 Comments Off on Construction of Bluestar Memorial an SGPC decision, says Badal 551 Views

But soon after making the statement, Badal said it would be better if the media did not report it that way. “Please don’t write that I have said that the SGPC chief has lied. It will not sound good,” he said.

Badal was here to motivate SAD-BJP workers to participate in a rally to be addressed by BJP’s prime ministerial candidate Narendra Modi at Jagraon on February 23.

He said he had never interfered in the functioning of the SGPC.

“If Makkar has said this, he has lied. The matter was never discussed with me before taking a decision,” he said.

During an interaction with mediapersons at Amritsar on Tuesday, Makkar had said the memorial was brought up after discussion with Badal and that most decisions pertaining to the SGPC were taken by the CM.

Reacting to the statement of former Chief Minister Amarinder Singh about Badal’s alignment with the Centre on Operation Bluestar, he said, “Nobody can be a bigger liar than Amarinder. I have seen that you people rely more on his statements.”

About the Congress leader’s statement that Badal had spent only 40 months in jail and not 17 years as he had been claiming, he said, “Elections are around the corner and the Congress is resorting to all such measures just to spoil the atmosphere. I spent 19 months behind bars at the time of Emergency alone.”

CM had no role: Makkar

The SGPC decided to construct the memorial in view of the sentiments of the Sikh community. It was a long-pending demand, a resolution regarding it was passed by the SGPC executive committee on May 3, 2012. The SGPC didn’t have any discussion regarding the issue with CM Badal.