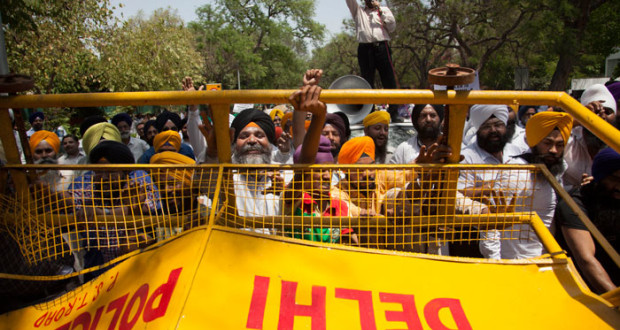 Amritsar, Punjab: The Cong ress on Sunday lashed out at the ruling SAD-BJP alliance for trying to polarise people along the communal lines by “blowing up issues out of context”.

The party also condemned a demonstration organised by the Delhi Sikh Gurdwara Management Committee (DSGMC) and the All India 84 genocide Victims Relief Committee outside the Congress office here on Sunday in protest against Congress candidate from Amritsar Capt Amarinder Singh’s statement “giving clean chit to Jagdish Tytler” in the 1984 genocide case.

The two leaders sought to make it clear that Amarinder had not given a clean chit to anyone including Tytler. They said he had told the interviewer that when he went around the genocide hit areas along with his brother Raja Malwinder Singh and cousin Raja Randhir Singh, nobody mentioned Tytler’s name.

They said Amarinder had clarified that the genocide victims named leaders like HKL Bhagat, Dharam Dass Shastri, Sajjan Kumar, Arjan Dass, Lalit Maken and some others but nobody named Tytler.

The Congress leaders asked the SAD-BJP leaders to explain why the NDA government, which remained in power for six years, could not establish the charges against Tytler.

Pointing oout that the case was pending in the court, they said, “Capt Amarinder only stated a fact that nobody told him about Tytler being involved (in the 1984 genocide)”, they pointed out.

Meanwhile, Amarinder favoured quota in jobs and educational institutions for the members of the economically-weaker sections among the upper castes.

Responding to the demands put forward by the Shri Brahman Sabha, Punjab here on Sunday, he supported their demand that the economically-weaker sections from the upper castes should also be provided benefits of reservation along with others.

The for mer Chief Minister agreed that there was a large number of people belonging to the upper castes who were not able to make both ends meet. “I know many such people who have been left behind and such people should also get the reservation benefit along with others as otherwise their talent and abilities will remain unutilised”, he said while addressing a function organised by the Brahman Sabha.

Earlier, Sabha president Dayal Prashar reiterated the support of the community to Amarinder. He also put forward some demands, including the benefit of reservation for the economically-weaker upper castes.