Comments Off on Captain corners BJP on Kutch farmers 704 Views

Amritsar, Punjab: Launching his election campaign from the Attari Assembly segment today, Congress candidate Capt Amarinder Singh said the BJP had “thrown Navjot Singh Sidhu out of Amritsar” and that the saffron party had no sympathy for the displaced Sikh farmers in Gujarat.

At his first public meeting here, he said: “They’ve brought in Arun Jaitley to contest from Amritsar. He has recently presented his vision for the constituency. First, you should tell the people why you have thrown out your MP Navjot Singh Sidhu, who was liked by the people. He was simply seeking the development of Amritsar and your government didn’t do anything for it.”

He wondered as to what Jaitley would do for Amritsar when the ruling alliance had meted out a raw deal to its own MP for fighting for the welfare of his constituency.

On the issue of Sikh farmers facing eviction in Gujarat’s Kutch area, Capt Amarinder targeted Arun Jaitley, saying: “If you love Amritsar and Punjab,
why didn’t you raise the issue of Kutch farmers with your party’s government in Gujarat from where you have been Rajya Sabha MP for the past many years?.”

In a bid to project BJP’s prime ministerial candidate Narendra Modi as “anti-minorities”, he accused him of being involved in the 2002 Gujarat riots and of doing little for the Sikh farmers in his state. He said the Christians in Gujarat too were being treated as “third-rate citizens”.

The former Chief Minister launched a scathing attack on the top SAD leadership, particularly Revenue Minister Bikram Singh Majithia. He lashed out at Majithia for “criminalising politics” in Amritsar district. He said he had been harassing Congress workers and would have to pay for it.

He said though Majithia belonged to a cultured family, he was not behaving in a civilised manner.

” He must remember that he cannot use the police for long and when the time comes, he will be made accountable for every act of omission and commission,” Amarinder warned Majithia.

He criticised Chief Minister Parkash Singh Badal for turning a blind eye to Majithia’s “activities”. Appealing to the people to vote for him, he said it was time that the Badal Government realised its failures and mistakes.

Accepting Jaitley’s challenge for a debate on national issues, Amarinder said: “He is welcome to debate on any issue of his choice which he may think to be national. For me issues concerning the common man of Punjab are as important as those that Jaitley considers national.” He asked the BJP leader to check his own record in Parliament before questioning his (Capt’s) attendance in the Punjab Assembly.

Amarinder said: “The Opposition, under his (Jaitley’s ) leadership sabotaged and undermined democratic functioning. I’m sure Jaitley must not have forgone his perks during the parliamentary session.”

He said crores of rupees had been wasted with the Opposition holding Parliament to ransom.

Capt Amarinder said he may not have attended all House sittings but when he did so, he found the behaviour of the treasury benches disgusting. He pointed out that there were very few sittings of the Vidhan Sabha in the past seven years and even these were “hijacked” by the treasury benches. “The Akali leaders always conspired to keep me out of the state Assembly with their unconstitutional and illegal expulsion order that was later set aside by the Supreme Court with severe strictures against the Akali Government,” he said.

Amarinder described the SAD-BJP alliance as “most opportunistic”. He pointed out that while the two parties were fighting the election together in Punjab, in neighbouring Haryana, they were fighting against each other.

Recalling his association with Attari, Capt Amarinder said during his tenure as Chief Minister, he had constructed Sham Singh Attari Road in memory of the Sikh General. Congress leaders Tarsem Singh DC projected Capt Amarinder as the “messiah of farmers”. They lashed out at the SAD leaders for the drug menace in the state.

If you love Amritsar and Punjab, why didn’t you raise the issue of Kutch farmers with your party’s government in Gujarat from where you have been Rajya Sabha MP for the past many years?

He (Arun Jaitley) is welcome to debate on any issue of his choice which he may think to be national. For me, issues concerning the common man of Punjab are equally important

I am glad that Saini has been shunted out. He should have been removed long back. A person with criminal cases against him should not be Punjab DGP

Previous: Gadar party believes that 1947 was just Transfer of Power not Freedom
Next: Prove what you did for ’84 genocide victims: Phoolka takes on SAD 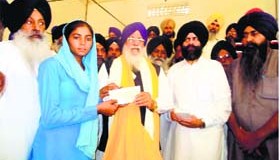 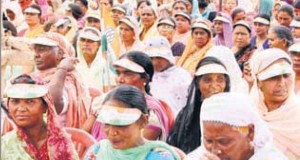 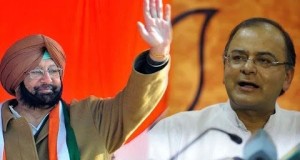