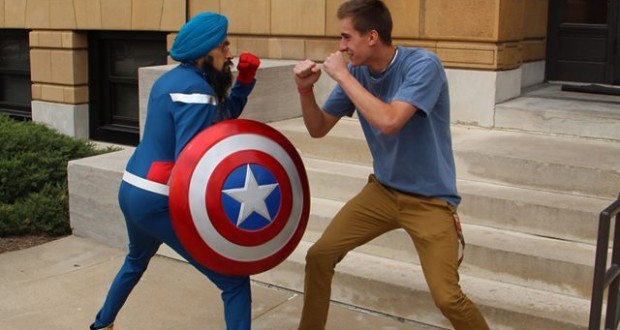 Captain America On a Not So Stereotypical Mission in Kansas

US: Intolerance and its by-products have been making a lot of news lately. From Clive Bundy’s musing about black people being better off in cotton plantations, to a white supremacist murderous rage at Jewish centers in Kansas City, to rapper Joe Budden posting a picture of an elderly Sikh gentleman at an airport with the caption “not on my watch, homey” implying all turbaned/bearded men are “terrorists,” to Clippers owner’s outing of private conversations revealing his disdain of black people.

We are far from an intolerant nation but deep seated stereotypes are pervasive in our lives. I have the dubious honor of being a continuous target of hate from young and old, men and women, white, black and Hispanic. As a turbaned and bearded American people from all walks of life feel compelled to exercise their ignorance, insecurity, bigotry in my presence.

Over two years ago I decided to reach out into the world of comic superheroes for a helping hand. I was preparing to showcase my cartoon work at the New York City comic con. The first Captain America movie provided the perfect candidate in my mind for this endeavor. A turbaned and bearded Captain on a poster with the slogan, “Just relax! Its called a turban. Inside is my long unshorn waist length hair. Now lets kick some intolerant ass,” served as a banner for over three days. It was enough to break the ice and get people to engage with me and my art.

The defining moment came when I spotted a blonde-haired boy around ten-years-old with his mother staring at me from a distance. I made contact with a smile. They came over to my booth with the mother telling me out of all the art available at the comic con, he only wanted the Captain America poster. She asked if it was on sale. I informed them, unfortunately, it was a banner not on sale. But I decided to sell the autographed copy to this young boy. That a young, white kid could connect with this manifestation of Captain America was all the affirmation I needed for my efforts.

One thing led to another. At the urging of a photographer I was walking the streets of N.Y.C. last summer dressed as Captain America for a photo-shoot challenging our perceptions and what it means to be identified as an America. The terrifying months of mental preparation leading up to the walk gave way to an exhilarating outing. A fictional superhero aided me in making an unexpected real life connection with thousands of countless strangers.

Few months later, I was out on the streets of N.Y.C. again as Captain America for a late night comedy segment. Then a trip to a film festival in Southern California. Early this year, I was hosted by the Japanese American National Museum as part of their Marvels & Monsters: Unmasking Asian Images in U.S. Comics, 1942-1986 exhibit.

My latest trip came just two weeks into the release of the latest Captain America movie. I would be visiting the heartland on the invitation of the students union at the University of Kansas in Lawrence.

My biggest concern for this trip was replacing my worn down body hugging costume after multiple trips on the streets of New York and Los Angeles. My search got frantic as the travel date got near. Captain America: The Winter Soldier came to the rescue. The modern looking jumper suit from the movie was available as a costume. But only in large and extra large sizes.

What ensued was a shopping spree online and through streets of N.Y.C., followed by major alteration efforts.

Altered suit along with all the accessories were available for pick up only hours before departure. No time for tryouts.

Little over 20 hours later, I was all suited, booted and turbaned up on the streets of KU campus.

As I strode along the campus streets, it was no N.Y.C. like hysteria. Smartphones did not come up with people snapping pictures without even asking for permission.

Heads turned, stares from bodies near and far. For many of these young Kansans I was their first in-person sighting of a turbaned and bearded person. Add to that the Captain America costume. Their mental digestive tracks had a sudden blast of a ethnic effervescence never tasted before. It was a little too much to consume in one sitting.

Eventually, we nudged students to feel free to take pictures with me. Strike even a super-heroic pose. I walked into a library, food court, administration building, bookstore and took bus rides. After a few hours we got plenty of students, staffers opening up to my presence, posing for stills, selfies and posting their comic encounters on social media.

The new jumper suit aided by the hip hop inspired Supra shoes were a hit. I felt the warm, hesitant embrace of the KU community accepting my quirky patriotic fervor as bonafide American expression.

I concluded the day with a multimedia presentation of my cartooning work and an informal survey at the student union. What are the first words that came to mind when you see me and where do you think I am from?

One group responded with; odd, scary, Saudi Arabia, middle-eastern, Kuwait, Captain Arabic, fortune teller. Another placed me in India. The last identified me as American.

A sizable majority of Americans fall in the first category. Which is why I have many more stops on this journey across the nation breaking down stereotypes, not only of turbans, but of red, blue, right and left America.

Oh, and I did learn Kansas has more statues of liberty than New York, it was the first state to ratify the fifteenth amendment giving blacks the right to vote, first to advocate a 40-hour work week, piggy bank originated in Kansas as a philanthropic enterprise, and the Westboro Baptist church was planning to picket a LGBT drag show on the KU campus just a day after my visit.