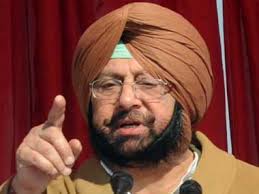 Comments Off on Capt backs gurdwara panel for Haryana 497 Views

Amritsar, Punjab: Captain Amarinder Singh, Congress deputy leader in the Lok Sabha, has said that chief minister Parkash Singh Badal had no right to oppose a separate gurdwara management committee for Haryana after being “responsible for the carving of that state out of Punjab”.

“It was the people such as Badal who spearheaded the campaign for a separate Punjabi ‘suba’ (state) that led to the creation of Haryana and Himachal Pradesh,” Amarinder claimed on Sunday in a statement issued here.

“If the Sikhs in Haryana now seek autonomy in running their gurdwaras as opposed to being remote-controlled by Badal and his stooges, what is wrong in it?” he said, adding that there was no reason to oppose the idea when similar committees existed in Delhi, Patna, and Maharashtra. “Badal is insecure about sharing power with anyone other than his family,” he commented.

The Amritsar parliamentarian claimed that a strong section within the Akalicontrolled Shiromani Gurdwara Parbandhak Committee (SGPC) favoured autonomy to Haryana Sikhs in the matter of running their gurdwaras.

“Sooner or later, this (separate SGPC for Haryana) is going to form, and it is better, if done now,” he said, advising Badal not to play politics on a sensitive issue.

The former CM asked Badal why he was “scared” of the idea of a separate body for Haryana when all members from that state in the current SGPC belonged to his party. “This should reassure you that your party can get the majority in the (proposed) Haryana body also,” Amarinder told Badal.

HARYANA CONG TO MEET ON JULY 6

NEW DELHI: President of the Haryana unit of the Congress, Ashok Tanwar, announced on Sunday that the party would organise a conference in Kaithal on July 6 to garner public opinion for establishing a separate Shiromani Gurdwara Parbandhak Committee (SGPC) in Haryana.

The party’s committee, headed by Haryana finance minister HS Chattha, had already received nearly 2-lakh affidavits in favour of a separate SGPC to manage Sikh institutions in the state. The Congress is hoping to garner the support of Sikhs before the assembly polls.

Previous: Global Sikh information centre likely to be set up
Next: Akali Dal Amritsar lashes out at SGPC