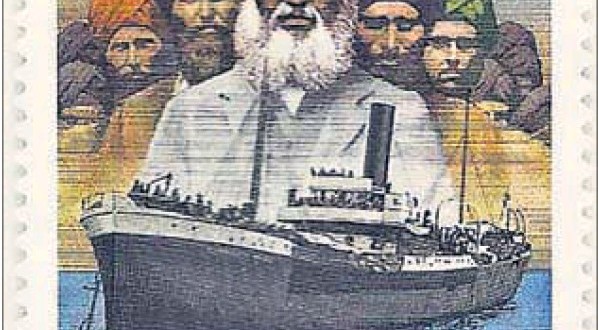 Chandigarh: Finally, an honour comes for Komagata Maru ship voyage, and that from the country that denied entry to Indian immigrants on board the ship on racial basis. The Canadian postal department would release a stamp on Tuesday to commemorate the centenary of incident.

It was on May 23, 1914, that Komagata Maru, a Japanese steamship hired by Baba Gurdit Singh, set sail for Canada with 376 Indians on board.

The Indians were not allowed to disembark at Vancouver in Canada and the ship sent back. On reaching India, the British g ove r n ment o rd e re d firing on the passengers as the ship anchored at Budge Budge port near Kolkata; at least 20 were shot and others imprisoned.

The stamp shows Baba Gurdit Singh standing along with others on t he s hi p, which was renamed ‘Guru Nanak Jahaz’. It would be released at Ottawa by the federal employment and multicultural minister Jason Kenney, and be priced at $2.50, which means it could be used for mailing international letters.

The incident inspired Indians to challenge the Canadian racist anti-Indian immigration laws, following which thousand of Indians living in the US came back to India to throw out the British from India. Historians often call it as the first nail in the coffin of the British Empire.

Even Canadian Prime Minister Stephen Harper issued a public apology in 2008 in Surrey Park, close to where the incident took place.

Welcoming the stamp release, Ludhiana professor Harish Puri, an authority on the history of the Ghadar movement, said, “It will once again recognise that the regimes of the time didn’t do justice with immigrants. Such gestures make a huge difference.” Last year, the Indian postal department, too, issued a stamp to commemorate the Ghadar Movement Centenary.