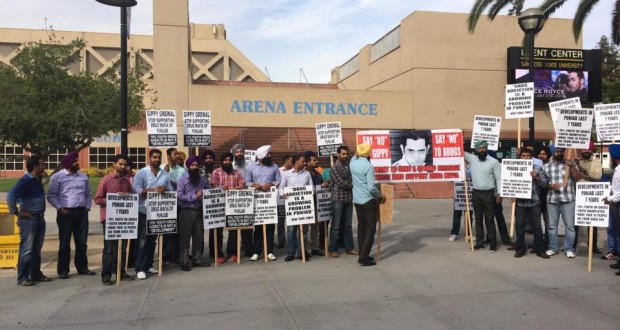 Protestors in front of SJSU Arena.

After Toronto based Sikh Activist group questioned why Punjabi Singers were endorsing Parkash Badal and Modi (read here). The reaction began to spread like wild fire, the Diaspora was offended and responded with threats of boycotts and protest at concerts – for these artists the consequences of their actions became very real, very quickly. Activists across the globe, responded peacefully looking for accountability. With a considerable amount of grievances against Badals and Modi, including an array of allegations ranging from corruption, torture and genocide, what good come of it?

Long after elections are over, Punjabi community of California still aware of the false image and promotion given to Badals and Modi by several Punjabi Singers and actors. Gippy Grewal and its promoter had flop show in San Jose as reported by protest organizers. 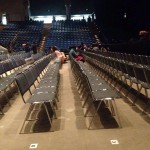 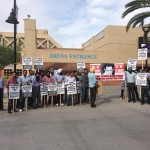 Protestors in front of SJSU Arena.

Punjabi singer and actor Gippy Grewal actor in a promotional video for elections in favor of Parkash Singh Badal And narendra Modi.