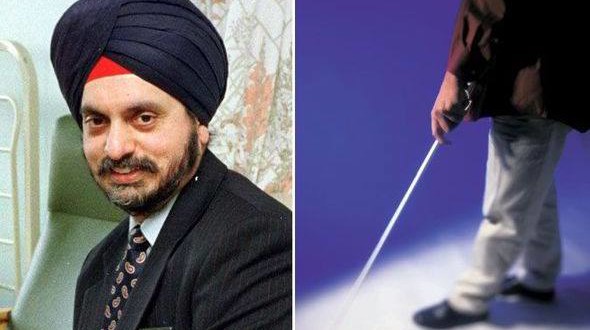 UK: A cure for blindness could be a step closer after a breakthrough by a British Sikh scientist.

Now he has discovered just how the ultra-thin layer – which is just 0.001mm thick – works, suggesting it could now be vital for beating glaucoma.

The eye disease is the second leading cause of blindness in the world and blights the lives of almost half a million people in Britain.

Professor Dua’s research has now discovered that the layer plays a vital role in the structure of the tissue that controls the flow of fluid from the eye.

The findings, published in the British Journal of Ophthal- mology, could shed new light on glaucoma, a disease caused by defective drainage of fluid from the eye.

The latest research shows that the new layer, dubbed Dua’s Layer, makes an important contribution to the sieve-like trabecular meshwork in the cornea.

This band of tissue helps maintain balanced pressure in the eye.

Defective drainage through the meshwork is an important cause of glaucoma. The new study also sheds new light on the basic anatomy of Dua’s Layer, which is incredibly tough.

Comprised of thin plates of collagen, it sits at the back of the cornea between the corneal stroma and the Descemet’s membrane.

By examining human donor eyes using electron microscopy, researchers were able to look at Dua’s Layer beyond the central part of the cornea to shed more light on its features at the extreme periphery of the cornea.

They discovered that the collagen fibres of the layer also branch out to form a meshwork and that the core of the meshwork is an extension of Dua’s Layer.

It is hoped the discovery will offer new clues on why the drainage system malfunctions in the eyes of some people, leading to high pressure.

Professor Dua said: “Many surgeons who perform lamellar corneal transplant recognise this layer as an important part of the surgical anatomy of the cornea.

“This new finding resulting from a study of the microanatomy of the periphery of the layer could have significance beyond corneal surgery.”

The breakthrough discovery of Dua’s Layer was first revealed in a paper in the academic journal Ophthalmology in June last year.

Speaking at the time about his discovery, Professor Dua said: “This is a major discovery that will mean that ophthalmology textbooks will need to be rewritten.

“From a clinical perspective, there are many diseases that affect the back of the cornea which clinicians across the world are already beginning to relate to the presence, absence or tear in this layer.”

The new layer is located at the back of the cornea between the corneal stroma and Descemet’s membrane.