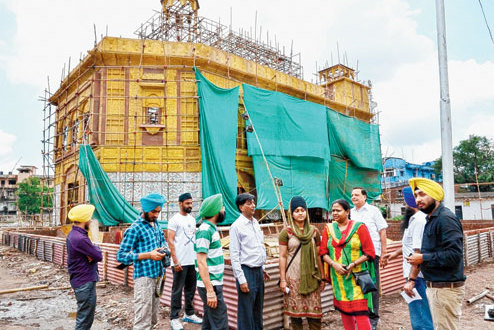 Organizers Bharatiya Yuvak Sangh on Sunday agreed to make the needed modifications as a gesture after a Sikh delegation from Jamshedpur visited the capital to point out to them that they did not like the idea of placing a Durga idol inside the exact copy of saachkhand Sri Harmander Sahib.

Twelve members of Dharm Prachar Committee came down to Ranchi to meet the organizers.

We had decided to create a replica of the Sri Harmandir Sahib to spread the message of the triumph of good over evil. We never wanted to hurt the feelings of any community, said Basant Kumar, director of the Sangh.

The Durgiana Mandir is only a smaller version of the Sri Harmandir Sahib made by Hindu fanatics “Arya Samaj” in order to steal the popularity of Sikh known religious Darbar Sahib.

Regarding the smoking issue, Kumar said that though they also do not support it, it was beyond their control.