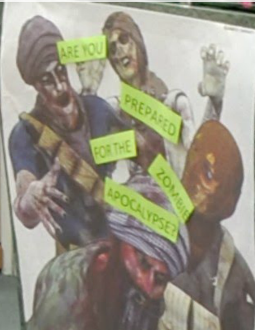 Raleigh, North Carolina: The Personal Defense & Handgun Safety Center, a shooting range and gun shop in Raleigh, North Carolina, prominently displayed a poster with the title “Are you prepared for the Zombie Apocalypse?” The poster contained images meant to scare the general population and depicted “scary” characters. Unfortunately, two of “zombies” wore turbans and sported beards, easily confusable for Sikhs.

Staff Attorney Manmeet Singh wrote to the shooting range, demanding the offensive posters be removed from the store. Manmeet wrote, “In a post 9/11 world, these posters reinforce the stereotype that all turbaned men are dangerous and should be attacked. Historically, such ignorance has led to many Sikh fatalities, including brutal hate crimes against Sikhs post 9/11. The most horrific attack was in Oak Creek, Wisconsin at the Sikh House of Worship, where six people lost their lives… Posters such as the ones in your shop are a threat to public order and safety. They are likely to instigate violence and pose a threat to life to members of the minority Sikh (and Muslim) community in North Carolina, and otherwise in the United States.”

In response, the shooting range reported that they will remove the poster and stop all future sales: “We have a wonderful melting pot of peoples in the Raleigh area and think that is one of the strengths of our city. A very diverse and open minded people make for a great place to live and raise children. I have removed the poster and we will not carry this display or offer it for sale going forward.”

Such awareness and changes in merchandise assist in prevention of future hate crimes and tragedies.

Thirteen years have passed since the day we never saw coming, the day that changed America and impacted the lives of every single American. While we take this day to remember the lives lost and the tragedy that affected our nation, let’s also celebrate our identity and ability to raise awareness on the beauty of Sikhism across the nation.

Just in the past year itself, we have worked to bring Sikh Awareness presentations and trainings across the nation to educate on the beauty of Sikhism and its values. Our team has taken up opportunities in their local chapters to train law enforcements, educate colleagues, and provide educational materials to their networks. In addition, we are proud to have completed several “first ever” Sikh Awareness trainings in other towns, including:

UNITED SIKHS is committed to raising awareness in honor of the lives lost on 9/11 and victims of hate thereafter.