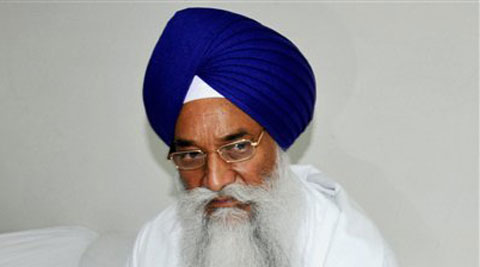 Amritsar, Punjab: The Akal Takht welcomed the decision of the Supreme Court to maintain status quo on Haryana’s gurdwaras, and asked the two warring sides, the Shiromani Gurdwara Parbandhak Committee (SGPC) and the Haryana Sikh Gur udwara Mana g ement Committee (HSGMC), to abide by the verdict and refrain from indulging in any violence.

“What the Supreme Court has said now, is precisely what we had said in our directive on July 28. We had also called for status quo till a final decision does not come from the Akal Takht,” said Takht jathedar Giani Gurbachan Singh after presiding over a sixhour meeting of the Sikh high priests here on Thursday.

Addressing the media after the meeting, the jathedar of Sikhism’s temporal seat announced that a coordination committee would be formed “very soon” for finding a “meaningful” solution to the row. He did not elaborate on the composition of the committee but said it would solicit views of the parties concerned and put these before the consideration Singh Sahibs (the Sikh clergy) for consideration.

Asked whether it would be advisable on his part to form a committee as the matter was now under the jurisdiction of the country’s apex court, he was quick to reply: “Anything that concerns our gurdwaras comes under the preview of the Akal Takht.”


He also asked all Sikhs not to be misled by rumours and propaganda aimed at inciting violence. “Right at the outset, we had issued directions for maintaining peace and for finding an amicable solution. Now, again, we ask all to abide by this directive,” he added.

At the meeting, the clergy condemned the violence at Kurukshetra and at GuhlaCheeka and criticised the forcible takeover of shrines by the HSGMC at three places.

However, contrary to expectations, the clergy did not take any harsh decisions against those responsible for Wednesday’s violence in Haryana. As the meeting stretched on, there were apprehensions that a couple of members of the HSGPC would be excommunicated from the Panth for their role in the violence. The Takht has already excommunicated HSGPC ad hoc chief Jagdish Singh Jhinda and senior vicepresident Didar Singh Nalwi for their role in the formation of a separate gurdwara committee for Haryana. The third person excommunicated was Haryana cabinet minister Harmohinder Singh Chattha, who headed a commission that had backed the formation of the HSGMC. To a question, the jathedar said, “In the days to come, we will decide on this matter (of action) as the violence and forcible takeover amounts to desecration of shrines.”

It was during the course of the meeting that Giani Gurbachan Singh was informed of the SC’s decision. Details of what may have been discussed during meeting were not shared with the media, and a press release was prepared keeping in view the court verdict. Others present in the meeting included Takht Kesgarh Sahib jathedar Giani Mal Singh and Takht Damdama Sahib jathedar Giani Balwant Singh Nandgarh.