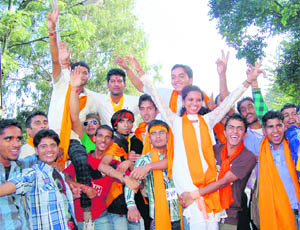 Amritsar, Punjab: Taking the advice that Chief Khalsa Diwan schools are for Sikhs, the Simranjeet Singh Mann party (SAD-A) has asked the Akal Takht to ensure that these were not given as venues to a student organization, the parent party of which didn’t recognize their separate identity.

The SAD-A will write to Akal Takht Jathedar Giani Gurbachan Singh about this. “Chief Khalsa Diwan is a Sikh socio-religious organisation. The Akal Takht has the authority to intervene in its functioning,” party secretary general Jaswant Singh Mann said here on Saturday. He was in the city to discuss the issue with former Shiromani Gurdwara Parbandhak Committee (SGPC) secretary and veteran Akali leader Manjit Singh Calcutta.

Calcutta said he would meet Giani Gurbachan Singh on this matter. The jathedar is in Muscat and expected to return in a day or two.

In Punjab and other parts of the country, Chief Khalsa Diwan runs many schools named after Guru Harkrishan, who was eighth of the 10 Sikh Gurus. Most of these are public schools. It also runs an orphanage and trains upcoming generation to become ‘granthis’.