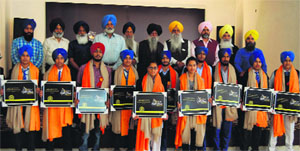 Fauja Singh said he felt honoured to felicitate Sikh children who have excelled in their sports along with being Sabt Surat Sikhs. He congratulated Akal Purakh Ki Fauj for organising this function.

He said Sikh children must preserve their distinct identity and should stick to their roots.

“No one can achieve anything if he is easily swayed by popular beliefs. The Sikh children must preserve their identity,” he said.

Director of Akal Purakh Ki Fauj, advocate Jaswinder Singh, said the aim of the programme was to create awareness among children. He said the Sabat Surat Sikh sports personalities had set an example for others.

The director said following tenants of one’s religion could never be an obstacle in the way of excellence.

Previous: Life shaped by genocide, he is seen as a crusader for humanity
Next: Akal Takht ignores Giani Iqbal Singh’s dismissal