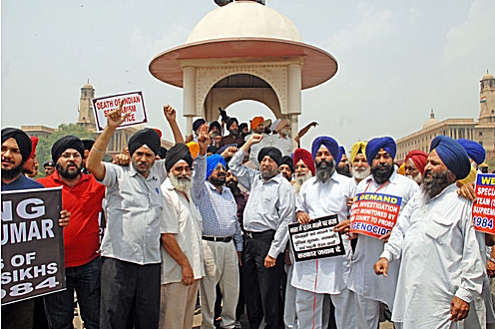 Comments Off on AISSF: Akalis playing politics over 1984 genocide 556 Views

Its president Karnail Singh Peer Mohammad claimed that Mukhtiar Singh, an eyewitness, now a DSGMC employee, had testified against Kamal Nath. Therefore, the Akalis should initiate legal action against the Union Minister.

Peer Mohammad said the SAD demonstration outside the AICC headquarters was a mere sham. “Since a gurdwara managed by the DSGMC was attacked during the genocide, the DSGMC chief must file a criminal case against the Congress leader,” he maintained.

Peer Mohammad said it was strange that the DSGMC and SAD leaders had raked up the issue just before the Lok Sabha elections.

He said the SAD leadership, instead of shedding crocodile tears, must come out with a concrete plan to ensure the guilty Congress leaders were convicted.