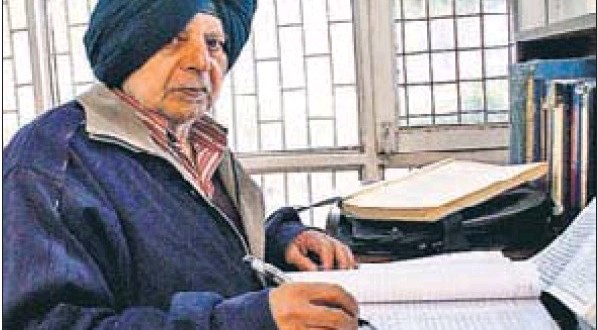 Comments Off on A postmodern Punjabi thinker 308 Views

Patiala, Punjab: In Dr Gurbhagat Singh’s death on April 3, the world of the English literature, Punjab, and the Sikh studies have lost an innovative thinker. The most severe blow is that his most-cherished project of translating the Shri Guru Granth Sahib into English remains incomplete. His translation of 1,208 pages will remain a hugely rich and valued contribution.

His family came from a village near Kotkapura in Faridkot district. His father Giani Hari Singh Jaachak, a poet and religious man, had a formative influence in his developing a literary orientation. The second influence on him was of a Patiala bohemian group called Bhootwara, whose unconventional views encouraged him towards radical intellectual orientation and an ascetic lifestyle.

He did his MA in Punjabi and English and later taught at Khalsa College, Patiala and Khalsa College, Delhi before going to the United States where he completed his PhD on William Blake at the world famous department of History of Consciousness at the beautifully located University of California, Santa Cruz.

Gurbhagat was deeply influenced by the French philosophers of the postmodernist, post-structural and post-colonial schools of thought. He was attracted to the post-modernist school’s celebration of diversity and pluralism against the hegemonic thought structures. Gurbhagat employed these insights into studying the Sikh conditions in India.

His most important books in English are-Poetry as Metaconsciousness, Western Poetics and Eastern Thought, Literature and Folklore after Poststructuralism, Sikhism and Postmodern Thought.

As a professor of English at Punjabi University, Patiala, which he had joined in 197677, he inspired a whole generation of young scholars by his challenging interpretation of Sikhism.

The Operation BlueStar in 1984 shook him to the core by confirming his worst fears about the hegemonic threat to minority cultures and identities. He did not view this as merely an armed invasion of a holy shrine but a far more serious attack-ideologically and culturally- on a minority world view. As an intellectual response, he played a leading role in setting up a study group in Patiala on the challenges facing minorities in India.

Finally, Gurbhagat zeroed in on the project of translating the Shri Guru Granth Sahib into English. He viewed the existing translations as contaminated by colonial distortions of the original (maulik) message of the Shri Guru Granth Sahib. Translation is an act of transmission of a cultural universe embedded in the vocabulary of a particular language.

For example, he viewed the translation of “Waheguru” as God as a highly Christianised cultural transmission. He translated that as “the Wondrous Guru” where “wonder (wahe)” in his view signified the multifarious and the joyous universe celebrated by Guru Nanak.

An authentic translation of the Shri Guru Granth Sahib for him was a project of contributing to decolonising the colonised mind.

He visited us many times in Oxford. I and my wife Dr Meena Dhanda, a philosopher, enjoyed discussing with him post-modernism, Third World, India and the latest in the Punjab studies. Gurbhagat made full use of the visit by buying books from the world famous bookshop, Blackwells, and finally his suitcase will be filled mainly with books.

I recommend three things to Punjabi University: one, the translation of the Shri Guru Granth Sahib should be completed in accordance with the aims set by Gurbhagat; two, all his published and unpublished papers should be placed in a separate Gurbhagat Singh section of the university library; and third, a post-doctoral fellowship be awarded to a young scholar to write a critical monograph on the works of Gurbhagat Singh. This would be at ribute to great scholar. (The writer is a professor of economics at Oxford Brookes University, Oxford, UK)