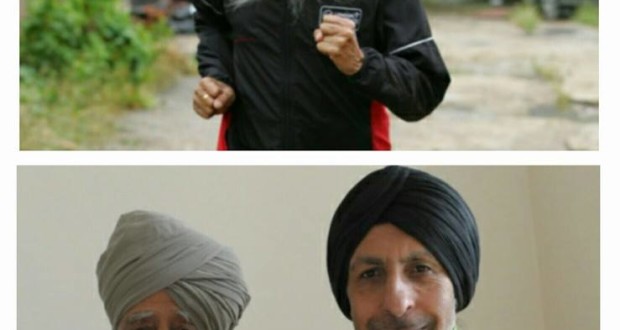 Comments Off on A 103-year-old Sikh marathon runner is urging people from all faiths to join a peace marathon calling for an end to war. 419 Views

Running club Sikhs in the City has organised the relay race to mark the centenary of the First World War as message of “co-operation and harmony”.

And founding member Fauja Singh, who was three in 1914 when the conflict started, has encouraged others to join in the race in Redbridge.

Mr Singh, who was the world’s oldest marathon runner before his retirement last year, said: “I urge everyone to support the race as there is too much violence in the world today.”

He said Sikhs in the City represents Britain in the Luxembourg Interfaith Marathon each year to show how all faiths can share a common effort for peace and harmony.

“I was only three at the time and it seems that despite the hundred years since, man still continues fighting man when there is no need,” he said.

“Man should be fighting injustice, poverty and hatred, not each other.”

Mr Singh, who was born in India in 1911, took up running in his eighties to distract himself from the trauma of losing his son, daughter and wife in quick succession.

He completed the London Marathon at the age of 89 before retiring after the Hong Kong marathon last year.

While he no longer runs, he keeps active by walking the same distance every day.

“I look forward to playing my part in the race, if only to start it and cheer others all day,” he added.

His trainer Harmander Singh, who is organising the event with the club, said the race was particularly in honour of the “forgotten victims” of conflicts – women and the elderly.

He said: “There are so many conflicts across the globe, some are politically motivated, others are for economic gain and sadly some people misuse their faith as a reason to inflict harm on others even though all religions preach peace.”

The event starts at 9am on Sunday August 24, from the corner of Roding Lane South and Woodford Bridge Road.

The relay will comprise 21 laps of a 2km route, with participants receiving a commemorative medal and T-shirt.

To register, contact Harmander Singh by Sunday August 17 on 07958 946868 or email harmanders@btinternet.com.

Previous: Will not accept any move to divide Sikhs, says Dhindsa
Next: Newcastle’s Sikh community remembers its World War I dead.