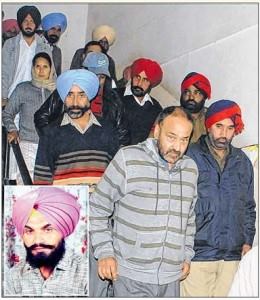 Bathinda, Punjab: It is learnt that eight Punjab police cops, who were convicted by the Bathinda additional sessions judge on January 10, 2014, were sentenced to life imprisonment in a 21-year-old custodial death case here on Tuesday.

Notably, 11 policemen were convicted for the death of Paramjit Singh, 25, and the quantum of sentence was announced on Tuesday (Jan. 14). Two of the accused had died during the trial and DSP Gurjit Singh, who had jumped parole in another custodial death case, was declared a proclaimed offender and the court did not announce the quantum of sentence for him as he was still on the run.

Punjab cops of Bathinda Sadar police station had picked up Paramjit Singh, a fireman at the ammunition depot, on July 17, 1992.

As per prosecution, the police claimed that when they took Paramjit Singh to a nearby village for recovery of arms, some unknown persons fired at them and Paramjit Singh fled from custody.

There was no trace of him for more than two years despite his father Gurdit Singh trying to locate him. In October 1994, when then Punjab and Haryana high court Judge R N Anand visited Bathinda, Gurdit approached him and the former asked then Bathinda sessions judge K S Garewal to probe the case. It came out during investigation that the youth was killed in police custody. A murder case was registered against 11 policemen and the family was provided Rs 1.5 lakh compensation as well.

DSP Gurjit Singh, who was jailed for the custodial death of another youth of Sherpur (Sangrur), had jumped parole in 2007. Paramjit Singh’ mother Ranjit Kaur and wife Beant said, “We wanted justice early but it was delivered after 21 years. The DSP should also be arrested and sentenced to life”.

It is notable that Indian security forces, including Punjab police, were indulged in wide-spread and systematic human rights abuses in 1980s-90s. Enforced disappearances, custodial torture and death, fake encounters were common policing practice during that period.

Jaswant Singh Khalra, a human rights activist had unearthed a wide-spread practice of systematic extra-judicial killings and secret cremations of innocent Sikhs, including youth as well as aged men and women. Jaswant Singh Khalra had presented documentary evidence, cremation ground record, to establish the fact that the security forces were killing Sikhs in fake encounters and their dead bodies were being secretly cremated as ‘unidentified/ unclaimed dead bodies’. Jaswant Singh Khalra had to lay his life for unearthing these abuses as he was also subjected to enforced disappearance and was killed secretly by the Punjab cops.

The Supreme Court of India (SCI) and National Human Rights Commission (NHRC) of India have recognized the fact that at least 2097 extra-judicially killed Sikhs were cremated in three cremation grounds – Durgyana Mandir, Tarn Taran and Patti. Near kin of victims were granted some compensation in these cases but the guilty cops were not proceeded against.

Except some specific cases, the human rights abuses in Punjab largely remain uninvestigated and the culprits are enjoying powerful positions, which is evident from the fact that Punjab police chief himself is facing serious charges of human rights violations – including murder of innocent persons.