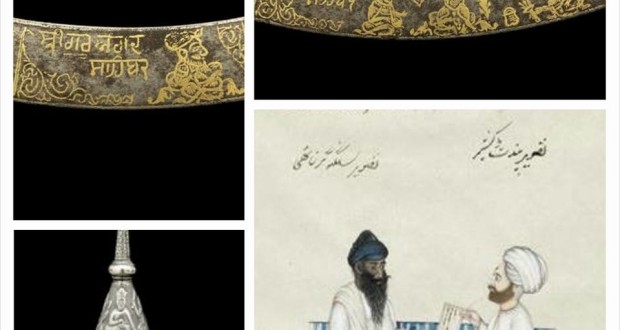 19th Century Sikh Art and Artefacts to be auctioned at Bonhams,

Comments Off on 19th Century Sikh Art and Artefacts to be auctioned at Bonhams, 532 Views

Of circular form, the outer edge sharpened, decorated in silver and gold inlay with alternating cartouches containing depictions of seated figures with inscriptions in Gurmukhi flanked by spandrels of vegetal interlace, and ogee arches, the interstices with vegetal interlace, the reverse with a zig-zag design formed by interlocking alternating triangles filled with foliate vines and stylised palmettes. 28.6 cm. diam.

FOOTNOTES – The inscriptions comprise the names of the Sikh Gurus.

Of conical form, the body depicting Sri Guru Nanak Dev Ji seated with Bhai Mardana to his right playing a stringed instrument, Bhai Bala to his left with a flywhisk, rising to a ridged tapering handle decorated with scale motifs, the base with alternating foliate and scalloped scrolling motifs, chain suspensions below. 18.5 cm high; 261 g.

FOOTNOTES – It is possible that this miniature silver parasol or chattrionce hung over a copy of the Sri Guru Granth Sahib Ji. There is a comparable example in the Asian Art Museum in San Francisco (inv. no. 2007.19) which depicts Sri Guru Nanak Dev Ji along with his two companions, Bhai Mardana and Bhai Bala.

Watercolours on watermarked paper (two watermarked 1850), four with embossed stamps in upper corner readingCommercial Post 1851 and an image of a sailing boat, all with identifying inscriptions in English and Persian in ink (in the case of four the inscriptions trimmed and mounted on the backboards), framed
the largest six 245 x 195 mm.; two 220 x 180 mm.; the remaining four 150 x 150 mm.(12)

FOOTNOTES – The subjects of the paintings are as follows:

1. Raja Dina Nath of the Royal Court, Pandit of Kashmir, of Delhi origin followed in Persian by: ‘[He is] the cause of pride among all people of the pen’. Raja Dina Nath (1795-1857) began as a military finance officer and rose to become finance minister to Maharajah Ranjit Singh in 1838. Lepel Griffin called him ‘the Talleyrand of the Punjab’ (L. Griffin, C. F. Massy, Chiefs and Families of Note in the Punjab, 1909)

2. Hari Singh Nalwah Bahadur Jang, followed in Persian by: ‘He has a turban on his head, tied a black shawl around his waist with a hanging dagger and with a soldier standing behind him prepared for action’. Hari Singh (1791-1837) was a senior commander of the army of Ranjit Singh. He took part in most of the battles which extended the Sikh empire almost up to the Khyber Pass, and was governor of Peshawar, Kashmir and Hazara. See W. G. Archer, Paintings of the Sikhs, London 1966, pp. 84-86.

3. Diwan Mulraj who was the comfort of Multan, was the just man of the world and the hero of all times. Mul Raj was Governor of Multan from 1844. The murder of two British officers at Multan was a contributing factor to the second Anglo-Sikh War (October 1848-March 1849). He was captured in January 1849 and died about a year later.

4. Rajah Suchet Singh (1801-44) was brother of Gulab Singh and Dhian Singh. The text in Persian reads ‘That Raja who is admired by all who have seen him, with the end of his turban hanging and [holding] a sword’.

5. A Gruntee, or Sikh who reads the Grant [sic]; A Kachmir Pandit; in Persian: ‘Portrait of Singh Grantahi’ and ‘Portrait of Pandit of Kashmir’.

6. Portrait of Ranjit Singh of Jalandhar with a description of him in Persian verse form, in short (a few words have not been deciphered): ‘A horseman of Afghan Jalandhar is Ranjit Singh with a gun on his shoulder; in appearance as soft as wax and in character as hard as iron and in bravery, prepared to sacrifice his life’.

2014-04-04
Guest Writer
Previous: A tale of two hijackers – One gets Congress ticket for fourth time and other is India’s most wanted.
Next: Gadar party believes that 1947 was just Transfer of Power not Freedom