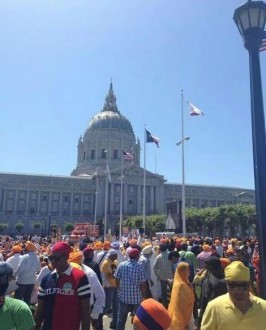 San Francisco, California, USA: Sikhs from all over California and neighboring States held a massive rally at San Francisco’s Civic Center earlier today. Estimated 15,000 showed solidarity and demanded self-determination in Punjab, the Sikh homeland. Sikhs from cities as far as San Diego, Los Angeles, Reno, Redding and Yuba City were present. Attendance by such a large number from Sikhs also seemed to have surprised the organizers. Several of BART’s trains were filled by Sikhs from the Bay Area.

The protest was well organized and included a number of renowned speakers, as well youth who expressed their desire to end decades of human rights violations in Punjab, and other parts of India. Punj Pyare and float of Guru Granth Sahib was followed by a float showing the decimated Akal Takht Sahib from 1984. California Gatka Dal also performed throughout the route. Youth kirtanis did a majority of kirtan seva on the main float.

Bhai Tirlochan Singh, son of Shaheed Bhai Amrik Singh who was a close associate of Shaheed Sant Jarnail Singh Bhindrawale, appreciated the efforts by the organizers. He stated that these events are very important however majority of Sikhs only “feel the pain for 1984″ for two times a year, in June and November. Majority of the community remains silent or less concerned about the plight of Sikhs in India during the rest of the year.

S. Karamjit Singh who came in from Chandigarh, Punjab, to take part in the event, also shared exclusive details about plight of Sikhs in Punjab and how the Government orchestrated 1984. He talked about continued injustices against Sikhs in their own homeland. S. Karamjit Singh is the ex-Editor of the Punjabi Tribune.

Bibi Navkiran Kaur, daughter of Shaheed S. Jaswant Singh Khalra, a pioneer of Human Rights in Punjab, also shed light on the events of 1984 and talked about her father’s role in highlighting the human rights abuses in Punjab. S. Khalra was eventually eliminated by the police for his role in documenting 25,000 illegal cremations in Punjab of Sikhs. Navkiran Kaur spoke about the increasing issue of drugs in Punjab. She also stressed the need for ‘Halemi Raj’ in Punjab, a concept in Sikh religion of self-determination with love and compassion for all beings.

Puneet Kaur (Fremont) and Jasmine Kaur (Vancouver), expressed the need of Sikh community to not shy away from seeking a sovereign state. Both speakers who are currently students expressed their thoughts on the Sikh Freedom struggle in English. Notably, the whole Civic Center echoed slogans in favor of independent Sikh homeland after speeches by them.

A number of other speakers, including Dr. Gurtej Singh, Amandeep Singh and Sandeep Singh of Sikh Student Association of Berkeley also shared stage. Amandeep Singh said that genocide doesn’t just apply to killing, but systematically destroying a culture. He said this is what the Indian Government has done to the Sikhs and other minorities.