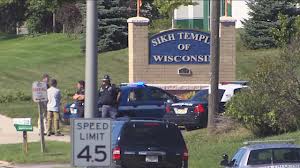 Lt. Brian Murphy, critically injured in a mass shooting at a Sikh temple in Wis. in August, is among guests at the State of the Union tonight.

Washington,USA: Washingtona police lieutenant wounded last summer during a deadly mass shooting at a Sikh temple in Oak Creek, Wis., is among two dozen guests the White House has invited to sit with the first lady during President Barack Obama’s State of the Union address Tuesday night.

The White House historically extends invitations to ordinary people to sit in the gallery of the House chamber during the speech, believing they can help put a human face on an issue or proposal the president will discuss during his annual address.

This year’s guest list suggests gun control, education, immigration, jobs and the economy, health care and voting rights are among the issues Obama planned to highlight. The list includes Kaitlin Roig, of Greenwich, Conn., a first-grade teacher at Sandy Hook Elementary School in Newtown, Conn. Roig’s school was the scene of another mass shooting in December that claimed 20 children and six adults at the school.

Also joining Michelle Obama in her box will be Cleopatra Cowley-Pendleton and Nathaniel A. Pendleton Sr., parents of 15-year-old Hadiya Pendleton, who was shot and killed near Obama’s Chicago home days after returning home after she performed during inauguration festivities in Washington. Mrs. Obama attended the drum majorette’s funeral on Saturday.

Oak Creek, Wis., police officer Brian Murphy was shot multiple times by a gunman who killed six worshippers in Wisconsin before taking his own life. The veteran policeman is on medical leave from the force while recovering from wounds to his head, neck and body, the White House said.

2013-02-15
Guest Writer
Previous: Proud To Be A Sikh based on true life incidents
Next: Pressure on Preneet Kaur to take up turban issue during Hollande visit