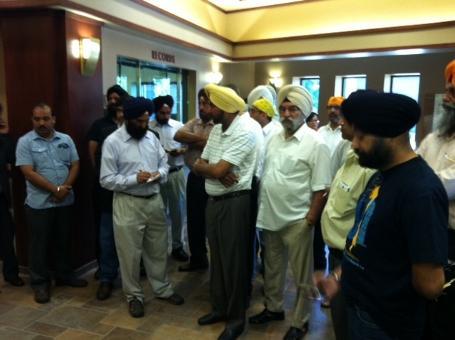 Milwaukee, USA: Members of the Sikh temple where a white supremacist gunned down six worshippers last year plan to mark the anniversary by holding religious observances and staging a 6-kilometer run to fund scholarships in the victims’ names.

Temple members are also working with local city officials in Oak Creek to organize a nighttime vigil in memory of those killed and injured.

Pardeep Kaleka, whose father was among those killed, said organizers wavered on how to mark the anniversary of the Aug. 5 attack. Some wanted to keep the occasion solemn, while he and others worried that an overly somber event would be too negative.

“You’ve got to balance respect for the victims with the spirit of going on in high spirits,” Kaleka told The Associated Press. “I don’t want this to just be a bad memory for the children.”

The FBI investigated the attack on the Sikh Temple of Wisconsin for months but concluded that gunman Wade Michael Page’s motives may never be known. The 40-year-old Army veteran, who also shot and severely wounded an Oak Creek police officer before killing himself, had ties to white supremacist groups, but agents found no evidence to suggest Wade had help or was acting at the behest of any such groups.

The memorial events will begin on the morning of Friday, Aug. 2. Priests will perform an “akhand path,” in which they read the Sikh holy book aloud from cover to cover. The rite can take about 48 hours, and worshippers generally stop by to listen for short periods.

The next day, the temple and the city of Oak Creek will stage a 6-kilometer (3.7 miles) run to honor the six victims. The money will be used for scholarships in the victims’ names, and leftover funds will go toward the construction of a memorial, said Harcharan Gill, a trustee with the temple.

“The run is part of the healing process,” Gill said. “It shows that we faced this situation and we are strong enough to get over this kind of tragedy, but we are not forgetting whatever happened.”

Plans for the memorial are still tentative, but one architectural upgrade to the temple is already in the works: The Kaleka family donated $50,000 to import seven ornate domes from India.

“My dad had always wanted these domes put on top of the temple,” Kaleka said.

Gill said the construction was expected to wrap up in time for the anniversary.

A related memorial event is also scheduled for Aug. 2, when officials with the U.S. Justice Department plan to hold an observance at the federal courthouse in Milwaukee.

U.S. Attorney James Santelle said the victims’ families and Oak Creek officials are expected to attend. Those invited also include U.S. Attorney General Eric Holder, who spoke at the victims’ memorial, and members of Wisconsin’s congressional delegation, along with Gov. Scott Walker and other state leaders.

2013-06-25
Guest Writer
Previous: Sacramento Sikh Couple Kicked Out of AMC Theatre
Next: Sikh politics to fore in Delhi, Cong, BJP in a spot