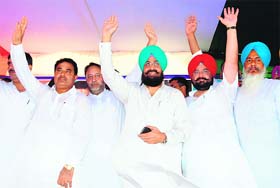 Comments Off on Will help Gujarat’s Sikh farmers: Bajwa 533 Views

Baba Bakala, Amritsar, Punjab:  Pradesh Congress president Partap Singh Bajwa today announced that the Congress would extend legal aid to Punjabi farmers fighting to save their land in the Kutch region of Gujarat. He accusing the ruling SAD of running away from the issue.

Addressing a rally here on the occasion of Rakhar Punya, Bajwa said: ” We’ve decided to extend legal help to these farmers contesting the case in the Supreme Court. I will meet Congress spokesperson Abhishek Manu Singhvi, a top lawyer, in this regard tomorrow. We will hire a battery of top lawyers to help the affected farmers,”

He said Deputy CM Sukhbir Badal had promised the farmers that the SAD would bear the expenses incurred on the legal battle and lead a delegation to Gujarat CM Narendra Modi. “However, he has fulfilled none of the promises, leaving these farmers in the lurch.”

Bajwa praised party leaders Jasbir Singh Dimpa and Ranjeet Singh Chhajalwadi for a united show at the rally. Though the Congress held a single rally, factionalism did come out in the open during the event.

Prior to Bajwa’s arrival, Dimpa and Chhajalwadi had an altercation on the dais with the latter objecting to the presence of a leader expelled from the party. However, party leaders intervened and pacified the leaders while forming a ring around them to prevent mediapersons from capturing the tiff on camera.

The PPCC demanded a white paper on the state’s economy. He said the state government did not have funds to pay salaries to its employees and disburse old age and widow pension to the beneficiaries.

He said the government had failed to disburse Rs 1,000 per month as allowance to the jobless as promised in the SAD manifesto. “We’ve asked our leaders to list names of 1,000 unemployed persons from each constituency and get them registered with the Unemployment Exchange. Subsequently, we will file a claim against the government on behalf of 1.17 lakh unemployed persons from 117 constituencies in the Punjab and Haryana High Court,” Bajwa said.

Referring to media reports that the Punjab Government had exhausted its overdraft limit, he said this indicated that the state was on the brink of bankruptcy. He said the state government had sought a loan of Rs 1,000 crore from PUDA against government land transferred to it for infrastructure development.

He said the SAD-BJP Government had imposed a heavy dose of taxes on the people and yet was unable to manage the state economy. “As a result of heavy taxes and poor law and order, industry is shifting out of the state. In the past five years, 274 industrial units have shifted to other states,” he claimed.

Bajwa claimed that Chief Minister Parkash Singh Badal had lost control over the state administration and his son (Deputy CM) was misusing the people’s mandate to promote his family business in transport, liquor and real estate. He accused Sukhbir of shielding the sand mafia and monopolising various businesses. “Sukhbir Badal is leading Punjab towards disaster,” he claimed. He threw an open challenge to the Chief Minister to accompany him to a gurdwara and vow that the liquor business in the state was not owned by his family.

Bajwa blamed the SAD-BJP Government for ignoring historical in matters of development and making false promises on promoting religious tourism in the state. Asking the Chief minister to ensure that no disrespect was shown to the turban, he pointed out that ” it was the SAD workers who toppled IAS officer KS Pannu’s turban in Uttarakhand.” Accusing the state government of failing to wake up to fury of floods in the state, he sought Rs 25,000 per acre for farmers who had suffered cent per cent damage to crops and Rs 15,000 per acre for those with partial damage to crops. Punjab Congress affairs in charge Harish Chaudhary and PPCC vice-president OP Soni were among those present at the rally.

Taking a dig at the SAD-BJP Government over the outburst by Chief Parliamentary Secretary Dr Navjot Kaur Sidhu, Bajwa said the Badal family only made false promises. “Their own Cabinet colleague has alleged that she has not received Rs 100 crore promised to her for her constituency.”

To a media query regarding former CM Capt Amarinder Singh’s plan to hold rallies in the state, he said he could organise rallies in his capacity as a state Congress leader and that he had no problem with it.

On SAD’s ‘false’ assurance to farmers

Deputy CM Sukhbir Badal had promised the farmers that they would bear the expenses incurred on the legal battle and lead a delegation to Gujarat CM Narendra Modi. However, he has fulfilled none of the promises — PS Bajwa, PPCC president

Previous: Ishnaan Seva at the Golden Temple
Next: Sukhbir may put off Canada visit 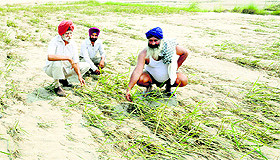 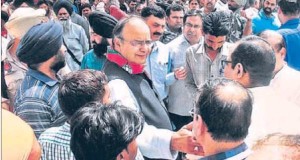