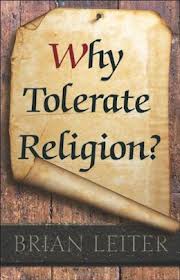 Comments Off on Why Tolerate Religion 373 Views

London, UK: Brian Leiter’s book asks probing questions about why in the tolerance stakes the religious is elevated above the secular

A young Sikh boy goes to school wearing a ceremonial dagger – the kirpan – and thereby causes the schoolteacher to alert the police, who arrive and confiscate the dagger.

Yet in most Western democracies, as Brian Leiter points out in this stimulating book, the Sikh boy would stand a good chance of getting the kirpan back and of being allowed to wear it to school. In fact, Leiter cites an actual case from Canada in which this happened.

Contrast this with a boy from a purely secular background where there is nonetheless a tradition of receiving and wearing a dagger when coming of age.

He would not be allowed to wear the dagger to school because in most Western countries the law “tolerates exemptions from generally applicable laws when they conflict with religious obligations but not with other equally serious obligations of conscience.”

Leiter’s central question is whether there is any reason to suppose that the moral ideal of tolerance should favour religious over secular claims of conscience.

He looks at a number of philosophical attempts to justify the idea that the state should tolerate acts of conscience before proceeding to identify the central features of religious practice and belief.

In the final chapter Leiter explores the consequences of this for the law of religious liberty.

He argues that if there are good reasons to prohibit the carrying of daggers to school, these should apply equally in religious and secular cases. Neither boy should be allowed to take the dagger to school.

At one point, Leiter refers to George W Bush as an “international war criminal” and, as someone who witnessed at first hand the “pernicious influence of reactionary Christians” on politics and public education in the US.

Leiter reasonably argues too that the French state violates the ideal of tolerance in attempting to ban private citizens from wearing religious symbols such as Muslim headscarves in public.

In one respect Leiter is perhaps over-generous to religion because while he agrees that many fundamental religious beliefs are false, his talk of religion as “rendering intelligible” important facets of existence should perhaps be replaced by talk of it only apparently rendering such facets intelligible.

Given the falsity of fundamental religious belief, the “existential consolation” it provides is akin to the consolation provided by a drug, which is why Marx described it as “the opium of the people.”

Overall, Leiter’s judicious and penetrating volume is an excellent example of how philosophy can be brought to bear on practical issues of the day.

2013-03-12
Guest Writer
Previous: Debate on Wednesday 13 March 2013 at 9.30am in Westminster Hall about the British Sikh community
Next: Punjab emerging as major drug producing hub