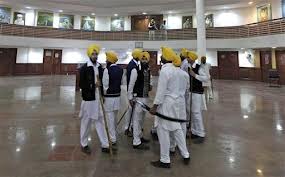 US based Sikh NGO condemns beheading of two Indian soldiers

Amritsar, Punjab:  While condemning the beheading of two Indian army jawan’s by Pakistan, US based Sikh NGO, Teri Sikhi has urged both India and Pakistan to exercise restrains to maintain peace in the region. Chairman of Teri Sikhi Jaspal Singh Sandhu told TOI over phone from US on Wednesday that “Hostility is not in interest of both India and Pakistan and they had to maintain peace at any cost” he said.

Teri Sikhi has been putting efforts for opening of corridor between Dera Baba Nanak (India ) and Kartarpur Sahib (Pakistan) and in recent past the organization had held a meeting in Fremont, California to urge both countries to include Karparpur Peace Corridor on their bilateral meeting agenda. He said incidents of killing of two Indian army jawan’s would definitely interrupt the peace process between two nations.

“But we should not quit our efforts at any cost” he said. He argued that it was due to efforts of civil society that both countries had started communicating at different levels. He also informed that a delegation of Teri Sikhi and other like minded organizations had met President Barack Obama and had urged him to use his influence in pressurizing both Indian and Pakistan governments to open corridor between two countries.

“If they can think of opening of Hussaniwala as another trade in Punjab then why not corridor” he reasoned. He said as bilateral talks between India and Pakistan were taking place, it had become more important than ever to allow free access to Kartarpur Sahib Gurdwara which was located near the Dera Baba Nanak in Gurdaspur district. After Indo Pak partition in 1947, Kartarpur Sahib where Guru Nanak Dev had spent last 17 years of his life went to the Pakistan.