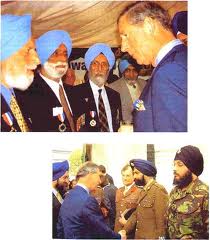 London, UK: Britain has honoured the contribution of thousands of Sikhs, who laid down their lives fighting for the British Indian Army during both World Wars at an event here.

The event at the Royal Military Academy Sandhurst in Berkshire, southwest of London, yesterday was held to commemorate the contributions made by the community to the British armed forces.

“Today is really about commemorating the Sikh contribution to the armed forces,” said Lt Colonel John Kendall, who organised the event at the Indian War Memorial room at Sandhurst. “It is a story of loyalty, courage and selfless commitment,” he said.

During the days of the British Empire, Sikh soldiers were highly regarded by British officers for their martial prowess.

“Sikhs have played an important role in the British Army for 150 years. In both world wars, Sikh regiments fought for the British all over the world, even on the western front in the First World War and they distinguished themselves very well,” Dr Anthony Morton, curator of the Sandhurst collection, told BBC.

There are 265 Sikhs currently serving in the British armed services and Army leaders hope, by celebrating the military contribution of their ancestors, more will be encouraged to join.

Previous: State govt names experts for studying Baba Bhaniara’s book
Next: With life-size statues, this farmer carves a niche for himself