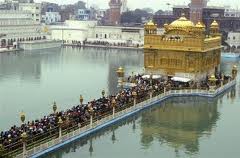 Amritsar, Punjab: A day after a news report was published in Amritsar Tribune regarding a rare fresco on the verge of vanishing near the Golden Temple, a team of the Department of Tourism today visited the site and showed keen interest in preserving the wall painting.

“This is a rare wall painting depicting the first Sikh master Guru Nanak Dev during a religious discourse with his sons Baba Sri Chand and Baba Laxmi Chand along with his two disciples Bala and Mardana playing ‘Rabab’,” said Tourism Officer Balraj Singh.

“I was deputed by Deputy Commissioner Rajat Agarwal to personally visit the site and look what could be done in this regard,” he said.

The head of the Baba Tehal Das Akhara who owned the samadh which adorned the painting was out of station and he would discuss the issue with him, he added.

Balraj Singh said if the akhara desired they would provide them the expertise for preserving the fresco.

We had highlighted the pathetic condition of the fresco located near the Golden Temple entrance where a plaza is being constructed.