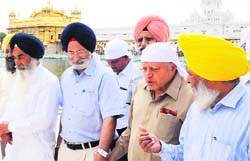 Amritsar, Punjab: Rajya Sabha MP and noted agriculture scientist Dr MS Swaminathan today stressed on the need to develop a new cropping system which was economically viable, ecologically sustainable and financially attractive to young farmers. He said the maintenance of Punjab’s agricultural health was fundamental to the country’s food security.

Talking to mediapersons after paying obeisance at the Golden Temple here, Dr Swaminathan said Punjab needed to adopt a crop rotation system which was sustainable and required less water. He disagreed with the idea that the state’s farmers should give up paddy cultivation.

“They must continue with rice as a major chunk of land is under basmati and basmati not only brings in valuable foreign exchange, but also prosperity to farmers.” He said the state’s farmers could adopt a three-year rotation.

He said it was time to rethink 50 years after Dr Norman Borlaug had introduced the hybrid high-yielding wheat in Ludhiana in 1963.

Dr Swaminathan said the income of farmers with small landholdings was going down with the increase in input costs. He said he had recommended remunerative prices on the basis of a formula (total cost of production plus 50% margin) which had not been implemented. He quoted the economic survey to drive home his point on the farmers’ plight. “The survey revealed that the farming community makes up for 60 per cent of our population, but their contribution to the country’s economy is a meagre 14 per cent.”

He said the economic survey only talked of yield and growth rate, but was silent on the average net income of farmers.

On diversification, the Rajya Sabha MP said alternative crops were good only if these had a proper market. Also, factors like environment, economy and growing conditions were critical.

On border farmers facing various hardships, he said they should be compensated. “A plan should be chalked out to fix compensation and the PAU could chip in to work out the details.” He said the state farmers needed to be educated on the impact of indiscriminate use of pesticides. On the agricultural scenario in the country, Dr Swaminathan said there were bright spots as well as dark spots.

“Punjab certainly is a bright spot while Maharashtra, grappling with a severe drought, is the dark spot right now