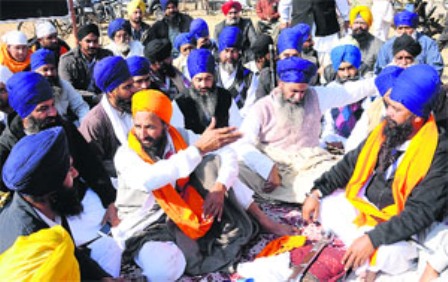 Amritsar, Punjab: Akal Takht Jathedar Giani Gurbachan Singh today held a meeting with legal experts to discuss the release of Sikh detainees, an issue raised by Gurbaksh Singh, who is on a fast-unto-death at Gurdwara Amb Sahib in Mohali to help their cause.

The Jathedar also met a delegation sent by Gurbaksh Singh along with detailed documents about the six Sikh detainees whose release he has been demanding. The delegation comprised Harpal Singh Cheema, Amar Singh Chahal and Gurbaksh Singh’s son Jujhar Singh. The Jathedar immediately forwarded the documents to the SGPC for pursuing the case with the government.

He also directed the SGPC to seek legal opinion and set the ball rolling to initiate the process for their release. He also appealed to Gurbaksh Singh to shun the path of hunger strike as it was against the tenets of Sikhism, though clarifying he may continue with his struggle for the cause.

On the other hand, SGPC chief Avtar Singh Makkar said they will hold consultations with legal experts and decide future course of action. The experts who met the Jathedar told him that they have seen the documents sent by Gurbaksh Singh and clarified that the release of Sikh detainees will take time as it has to pass through proper legal process.

Sources said the experts told the Jathedar that though these six Sikh detainees were lodged in jails in other states, the process for their release may be expedited if it was pursued by the Punjab Government.

Three of these Sikh detainees are lodged in Burail Jail (Chandigarh) while one each is lodged in Uttar Pradesh, Gujarat and Karnataka prisons.

Sources said the experts also felt that if the Punjab Government submitted a positive report about the three detainees in Burail Jail, stating that there was no threat if they were released now, it would help their case. They said it was also highlighted in the meeting that the co-accused of the detainee lodged in the UP jail had already been released and, therefore, his release should not be difficult.