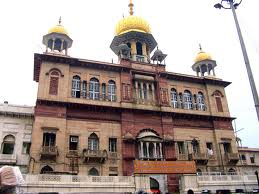 New Delhi: A historic Sikh shrine drawing faith of over 15,000 devotees daily, the Sis Ganj Sahib Gurdwara in the heart of walled city of Chandni Chowk, tops the tourist chart when it comes to religious sightseeing in the national Capital.

With a huge flow of tourists and devotees pouring in the holy place every day, not only as part of their religious rituals but to get ‘langar’ etc, the gurdwara plays a significant role in the Delhi Sikh Gurdwara Committee Management Election.

At was at this spot that the ninth Sikh Guru Teg Bahadur was beheaded on the orders of the Mughal emperor, Aurangzeb, in 1675. The body was taken away by his disciple Lakhi Shah Vanjra to village Raisina and cremated at the place where Rakab Ganj Gurdwara stands today. The head of the Guru was taken away to Anandpur Sahib by another disciple.

All the candidates in the fray understand the religious relevance of the Gurdwara.

“There is no end to the visitors here. The rooms here are full throughout the year,” said Baldev Singh, manager of the Gurdwara Committee. “I have been a regular visitor to this place for the last ten years. The facilities here are quite good,” said Inderjeet Singh from Pitampura.

The place has parking for about 200 cars and over 30 scooters and bikes. Though there was a plan for multi-level parking, the project has been shelved due to lack of consensus over the proposal.

The Gurdwara has around 250 rooms for the visitors. The place has a provision for 200 lockers for people who come to stay at night. The work is also on to make the Gurdwara centrally air-conditioned with a budget of over Rs 8 crore.

Known for being one of the nine historic Gurdwaras in the city, the shrine has put in place modern facilities for its visitors who come from all over the world.

“Many foreign tourists come and stay at the Gurdwara as you would not find such facilities in the vicinity,” said Kuldeep Singh Bajaj, vice-chairman, Gurdwara Sub-Committee.

The Gurdwara stands serene in the midst of the hustle and bustle of old Delhi and is witness to the transformation of Old Delhi into one of the biggest commercial hubs in the city.