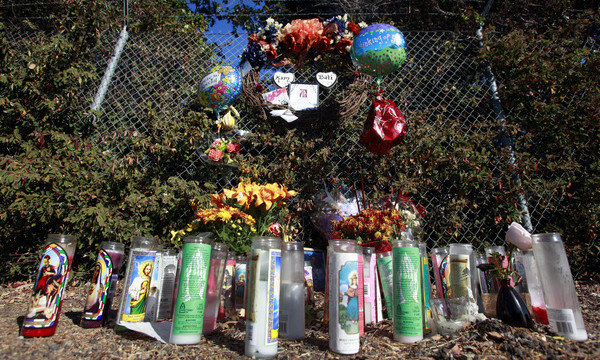 Menlo Park, US: Belle Haven is a small, working class neighborhood flanked by Facebook and a gorgeous, recreational trail meandering along San Francisco Bay. A road with a hard, blind curve connects the neighborhood to the bay, and that’s where, last week, a Sikh American couple were run down and killed as they walked their dog.

“It’s so unsafe there and so sad what happened,” said Carmen Contreras. “These people had no idea. They were just walking their dog.” Contreras was one of the few neighbors at home Thursday morning on Modoc Avenue. Most everyone else was across the Bay in Hayward, attending the funeral of Balbir and Kamal (Kaur) Singh. The couple died Oct. 24 when a car driven by an allegedly drunken driver plowed into them on Chilco Street.

At age 70, Adolfo Velasquez is one of the old-timers on Modoc, the quiet street with small but neat ranch-style homes. Almost every house has been plastered over with stucco or expanded by a room or two. Belle Haven and its neighbor to the south, East Palo Alto, comprise an island of cultural diversity — including Latinos, blacks and more recently, immigrant Sikhs — who have watched Silicon Valley grow rich around them.

“We didn’t talk much other than to say good morning and hello,” Velasquez said in Spanish. However, his two granddaughters were good friends with the Singhs’ two teenage girls. “My granddaughters, they cried and cried when they heard about the accident.” The two girls, said Velasquez, had joined relatives of the Singhs at a memorial service followed by group prayers at Gurdwara Sahib Hayward, a Sikh temple.

The day after the tragedy, Contreras visited a roadside memorial to the Singhs decorated with a few candles, flowers, balloons and some handwritten letters bidding them sad good-byes and blessings.

“Every time I came over to your house, you both were welcoming and inviting,” wrote one friend of the couple. “Some of my best happiness was in that house. Writing this letter, it doesn’t feel real.”

On Thursday, while the funeral was going on in Hayward, the unofficial shrine had grown to 50 votive candles, many of them decorated with the images of Catholic saints revered by Mexican-Americans. Balbir Singh was 50. His wife, Kamal, was 45.

While locals glumly gathered at the memorialized spot, “we talked about the road and how a lot of people use it to get to the bay lands,” said Contreras. “They could have been going there. This has brought awareness to us that something has to be done to make it safer.” The stretch of Chilco where the couple died curves more than 90 degrees and does not have a sidewalk.

Marjorie Reitzell, the driver of the car that hit the couple, was still in her vehicle when police arrived on the scene. She claimed she had no idea what had happened. The San Mateo County District Attorney’s Office has charged the 54-year-old Redwood City resident with two counts of gross vehicular manslaughter and two counts of DUI causing injury.

She remained in custody Thursday and missed her first court appearance because of an undisclosed medical condition. She is now due for her arraignment on Tuesday.

Word of the Singh’s death spread wide and quickly among the closely-knit Sikh community. In an email about the tragic accident to its stunned members, the Milpitas-based North American Punjabi Association expressed “grief and condolence.”