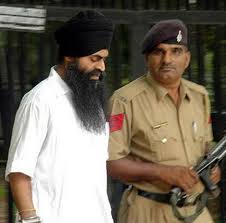 President Pranab Mukherjee already has turned down the petition once, going with the Supreme Court order of death sentence to Bhullar. Before the march, the representatives of various Sikh organisations performed ardas at the gurdwara. Sant Samaj representative Gurpreet Singh Randhawa, member of the Shiromani Gurdwara Parbandhak Committee (SGPC) and proShiromani Akali Dal leader, had made the arrangement for the meeting, yet most senior leaders of the SAD, state’s ruling party, stayed away from the programme.

The joint action committee of the participating Sikh bodies claimed to have collected 75-lakh signatures in support of clemency to Bhullar. It stated that more than 8,000 panchayats and registered social bodies of the state also had passed resolutions against the impending execution of Bhullar. The petition, along with the copies of the signatures and resolutions, will be handed over to the President on Friday. The bodies asked chief minister Parkash Singh Badal to call a special session of the assembly to pass a resolution to save Bhullar.

Harpal Singh Cheema, member of the JAC, said the various panchayats of Fatehgarh Sahib district and the district presidents of all political parties, including the SAD and Congress, also had passed resolutions against the execution.