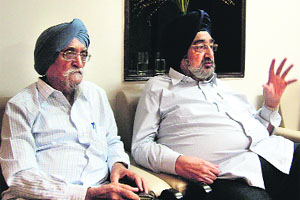 Comments Off on Sikhs to commemorate centenary year 407 Views

Patiala, Punjab: In order to pay tributes to the Indian passengers of the Komagata Maru ship, who were killed by the British police at the Port of Budge Budge of Kolkata on September 29, 1914, the Sikh community in West Bengal is all set to commemorate the centenary year of the incident. They have already met West Bengal Chief Minister Mamata Banerjee in this regard.

Joginder Singh Johal, son of late Punjab Chief Minister Darbara Singh and a leading Sikh activist in West Bengal, who was at Punjabi University to attend the South Asian Punjab Conference, said he had discussed the commemoration plans with former Chairperson of the Minority Commission Tarlochan Singh and Dr Jaspal Singh, Vice-Chancellor of Punjabi University. He said they had agreed to take part in the programme.

Komagata Maru was a Japanese streamliner chartered by businessmen Gurdit Singh to bring Indian immigrant to Canada. In April 1914, the ship departed from Hong Kong to Japan. The passengers on the ship included 376 Indians— 340 Sikhs, 24 Muslims and 12 Hindus. However, when the ship reached Canada via Japan, it was not allowed to dock under the Asian Exclusion Act formulated by Canada to keep the Asian immigrants out. The passengers waited on the docks for almost two months and on July 23, 1914, the ship was forced to return from Vancouver. In September 1914, when the ship returned to Kolkata, the British government stopped its entry and when the passengers protested, the policemen fired at them. The incident claimed 21 lives (official figure quoted by the British government. Some books have reported 100 deaths.)

Johal said, “The horrific incident shook the entire nation, but youngsters are unaware of the atrocities these passengers faced. In 1954, Jawahar Lal Nehru dedicated a memorial to the tragedy. However, no one remembers these passengers now. Therefore, the Sikhs residing in West Bengal have decided to celebrate this year in a big way.” Meanwhile, Johal urged PM Manmohan Singh to release a commemorative stamp on the killings of the passengers. He said the Canadian government was releasing a postal stamp on it. He said he would soon meet Punjab Chief Minister Parkash Singh Badal for he wanted the Punjab government also to take part in it.