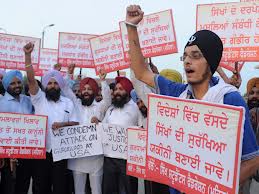 Chandigarh, Punjab:  Several thousand Sikhs from across India have announced to lead protests against the turban ban on Sikh students in France, threatening to jeopardize the Rs 90,0000 crore fighter plane deal the Union government will sign with the visiting French President Francois Hollande next week.

International Sikh Confederation, a leading Sikh representation, shot off a scathing missive toPrime Minister Manmohan Singh on February 7, asking him to not allow further intolerance of the Sikh faith in France.

“The turban ban is a very sensitive issue and we are surprised that our government has not responded to it. Besides, both the governments have chosen to ignore our community’s demand by adding fuel to fire and increasing defence and nuclear purchases from France. This is the right time to include our agenda with forceful discussion or face consequences,” said the letter, a copy of which is with TOI.

The turban row had started on March 15, 2004, when the then French President, Jacques Chirac, brought an amendment to the French code of education that banned wearing clothing or symbols in state schools which “exhibit conspicuously a religious affiliation”.

Less than two months back, a worried national commission for minorities (NCM), too, had decided to take up the case with the Union government.

“A letter on the French government’s ban was sent thrice to the ministry of external affairs. However, no response was given to us. We call for a determined effort before the issue escalates further and hurts ties between the two governments,” said NCM chairperson Wajahat Habibullah.

The row had assumed heightened importance in three years after the United Nations asked the French government to act on its judgments and recommendations in two cases involving the humiliation of Sikhs, who were asked to remove their turban publically. The United Sikh, a rights body, had won these cases in the UN.

In one case, on December 16, 2012, the UN rights body had asked France to reverse the expulsion of author from the school for wearing a keski ( a small turban). “The student has right to manifest one’s religion and right to privacy and non-discrimination. The reply must be given to the UN within 180 days,” the UN judgment said.

In the other case, the UN announced that France had violated the religious freedom of Ranjit Singh, 76, by asking him to remove his turban for his ID photograph. Singh, despite ill-health, has had no access to the public health-care system or to social benefits since 2005 as his residence card was refused because of his refusal to remove his turban.