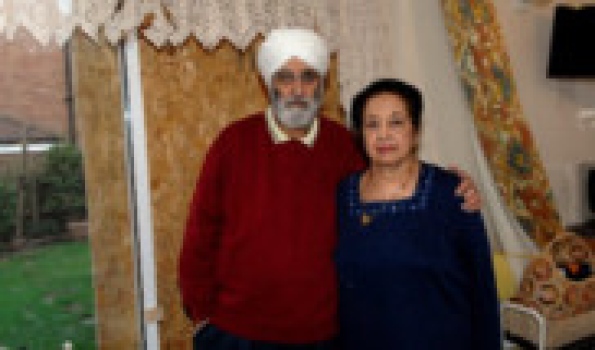 UK: A police patrol responding to a burglar alarm disturbed a pair of intruders stealing gold jewellery from an Asian community leader’s home.

The burglars were seen fleeing over garden fences while residents Gurmukh and Satwant Singh were out for just an hour on Tuesday last week (February 12).

The break-in, on Gossops Green Lane,is being linked with a series of burglaries targeting high-value gold jewellery kept in Asian households.

Mr Singh said: “My wife and I are in absolute shock. We’re still looking at the mess they’ve made.

“They went straight upstairs to the bedroom and rifled through the whole thing taking whatever they could find.”

Mr Singh, a magistrate for 26 years and a trustee at the Sikh Community Centre, said: “My burglar alarm went off as the policeman was driving past my house which was a miracle.

“I’m really happy the police heard the alarm, or perhaps the damage could have been much worse.

“Like most people we do keep some valuables in the house. We’re still trying to check everything.”

Organised criminals gangs from out of town have been blamed by police for targeting more than 50 Asian victims across Crawley last year.

The break-ins stopped over the Christmas period but restarted recently with more than 10 new burglaries.

Crawley District Commander Chief Inspector Justina Beeken said: “We have had a number of arrests regarding these style of burglaries but we need to make sure that Crawley is a hostile environment for anyone thinking of targeting the town. I am keen to make Crawley an unattractive place for burglars, and I am looking at new initiatives to tackle them.A further two linked burglaries were reported on Friday, one at Friends Close, Langley Green and another at Booth Road, Bewbush. Anyone with information is asked to call police on 101 quoting Operation Minnesota