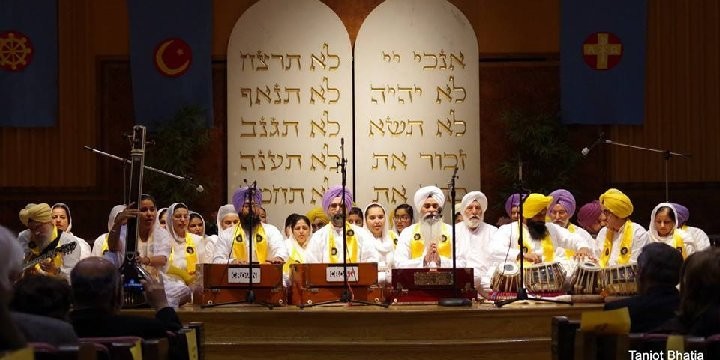 This annual event has brought together faith communities around the D.C. area to celebrate diversity and religion through song, chant, and dance. This year’s performances included the Jatha of the Guru Gobind Singh Foundation (GGSF), a group that performs at the regular Sunday services at the National Sikh Center in Rockville, Maryland. They sang a shabad, “Daan dhaee saadhhoo kee dhhooraa” written by Guru Arjun Dev Ji. Its meaning was then read aloud the by the host, Greta Kreutz of ABC 7 News.

“Playing kirtan in front of an audience this size provides an opportunity for people to experience the very basic and core element of Sikhism, which is our spirituality… Music is common language of all hearts and it transcends barriers of religion and ethnicity,” said Dr. Rajwant Singh, a board member at the InterFaith Conference as well as the founder and chairman of the Sikh Council on Religion Education (SCORE).

Sikhs have been performing at the InterFaith Concert since 1987 when they first joined the InterFaith Conference of Metropolitan Washington (IFC), an organization started in 1978 that brings together 11 different religious groups for the “dual purpose of interfaith dialogue and collaboration for social justice” around D.C.

Other concert participants varied from the Mormon Church Choir to members of a Protestant Church from Cameroon, and even included a Bharatnatyam dance by the Association of United Hindu & Jain Temples.

For Jagjot Kaur, a junior at Gaithersburg High School and member of GGSF, Interfaith has showed her how different religions and different cultures can work together and build upon each other’s moral beliefs.

“Interfaith is a way to get Sikhism out there, while also reassuring you that there are good people working together,” she says.

Hana Kaur is a student at Hoover Middle School, where she recently started a Diversity Club, and says that InterFaith and Sikhi were her inspiration.

“We all are different religions, but at the end of the day we all have the same message. Interfaith is accepting everyone, and diversity is very important. I love the feeling of unity,” she says.

IFC’s members are the Baha’I, Buddhist, Hindu, Islamic, Jain, Jewish, Latter-Day Saints, Protestant, Roman Catholic, Sikh and Zoroastrian faith communities in this region. The concert is the signature program of the IFC’s Center for Building Community initiative, one of three programs working towards diversity. The other initiatives include the Center for Advancing Justice and the Center for Nurturing Understanding.

“This conference brings people together to work for social mercy, harmony, and dialogue. It’s really about the bridges we can build together and the relationships that are established between many of the largest regional religious organizations,” says Rizwan Jaka, a representative of the All Dulles Area Muslim Society (ADAMS).

This sentiment is widely shared among the organization’s leadership, including G. Wilson Gunn, Jr., the General Presbyter of the National Capital Presbyterian Church.

“There’s a real beauty to authentic, deep, and well-expressed piety all across different peoples and it really enriches my own spirituality. More importantly, it’s a place to go when atrocities happen, like in Wisconsin, where we come together and we have a real voice for peace,” he says.

This year’s concert was an auspicious occasion and more special than most, due to the honoring of recently retired Reverend Dr. Clark Lobenstine. Dr. Lobenstine was the first and only Executive Director of the IFC for 35 years. He was responsible for the growth and success of the IFC and is well-recognized as a leader in Interfaith in the D.C. area. Also, he is a Parish Associate at the Silver Spring Presbyterian Church, founding member of the Washington Metropolitan Dialogue, and is the elected secretary of the D.C. Mayor’s Interfaith Council.

“This is not work that can be done alone. Beyond the Holy Spirit’s work, the honor belongs to the InterFaith Conference and each of you for your tireless effort on behalf of this community. You have done the work to make the National Capital region a model of religious cooperation, collaboration, respect, and understanding,” said Dr. Lobenstine in his farewell speech.

He has helped Sikhs for decades, welcoming them to the conference while helping Sikhs distance themselves from the misconceptions created by the violence surrounding Indira Gandhi in the 1980s. He opened many doors for the Sikhs in the metro area, helping push awareness and understanding of the faith.

Inderpal Singh Gadh, Chairman of GGSF, said, ” Celebration of the 35th anniversary of the Interfaith

Conference of Washington DC was a memorable event. At our religious gatherings, we often hear about the need to practice love, harmony, peace, service, humility and coexistence. These are some of the core principles of Sikhism. At the conference however, I could see all that being practiced. Indeed it was a joyful evening. As little as I know about Dr. Clark Lobenstine personally, the huge gathering on November 19, 2013 that came to celebrate the event and his retirement spoke volumes of how much they loved him and appreciated all the good work he has done over the years reaching out to people of different faiths big and small and building bridges with them.”

“Over the years, I have seen Clark so focused and passionate about building bridges between faiths and creating a harmonious and loving community in which every religion and faith can flourish and learn from each other. He has sown the seeds of love and mutual respect for the future generations and the Sikh community is indebted to him for welcoming us into this InterFaith family,” Dr. Singh says.

Dr. Lobenstine had one key to a true interfaith community: “In diversity, unity will change the world.”