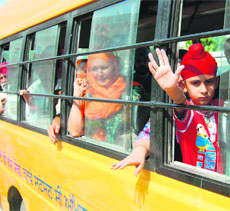 Comments Off on Sikh jatha leaves for Pak 512 Views

Amritsar, Punjab: A 202-member Sikh jatha today left for Pakistan on a special train to observe the death anniversary of Maharaja Ranjit Singh at Gurdwara Dehra Sahib in Lahore. The jatha were to board the train to Pakistan at Attari railway station.

The jatha will commemorate the occasion on June 29 and will return the next day. As many as 122 devotees are visiting Pakistan under the aegis of the SGPC. It has been learnt that the SGPC had forwarded to the authorities in Pakistan a list of 140 aspirants for this pilgrimage. Eighteen pilgrims were denied visas.

Meanwhile, before leaving for Pakistan, SGPC member Gurinder Singh Tharu, who was leading the jatha, said they would pay obeisance at Gurdwara Nankana Sahib, Gurdwara Panja Sahib and other religious places before reaching Gurdwara Dera Sahib on June 29.

Tharu said they would pay obeisance at Gurdwara Sacha Sauda, Farooqabad and Gurdwara Nankana Sahib on June 23. The next day, the jatha would reach Gurdwara Panja Sahib.

“From there, we will proceed toward Gurdwara Dera Sahib two days later. On June 27, we will reach Lahore for Akhand Path. On June 28, we will pay obeisance at Gurdwara Rodhi Sahib, Aamnabad and Sri Darbar Sahib in Kartarpur and return to Gurdwara Dehra Sahib,” he said.