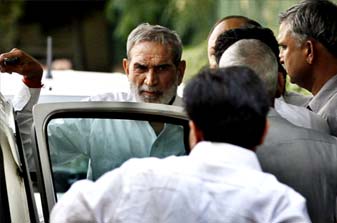 New York, USA: A US based Sikh rights group has announced a million-dollar reward for those individuals whose testimony and evidence may result in the conviction of Congress leader Sajjan Kumar.

The reward will be given to those individuals who will come forward with tips, evidence and testimony leading to the reversal of a Delhi court’s judgement acquitting Kumar in a 1984 anti-Sikh riots case, Sikhs for Justice (SFJ) announced.

SFJ said it would engage top advocates to prosecute the appeal against the acquittal of Kumar before Delhi High Court.

The reward presented an “opportunity for those who witnessed the killings to come forward with testimony and evidence to help victims in seeking justice against those Congress leaders who organized violence against Sikhs,” SFJ legal advisor Gurpatwant Singh Pannun said.

Since Kumar was acquitted on the basis of “benefit of doubt” because complainant Jagdish Kaur’s testimony was not corroborated by any independent witness, SFJ will campaign to find additional witnesses relating to Kumar’s role.

Several Sikh leaders in the US have expressed their “dismay and shock” at Kumar’s acquittal.

Sajjan Kumar’s acquittal on Tuesday came almost three decades after an estimated 3,000 Sikhs were killed in three days of riots in India’s capital and elsewhere after the Oct 31, 1984, assassination of then prime minister Indira Gandhi.

Previous: Sikh warrior turban is in Tower exhibit
Next: Sikhs come together in Lansing to celebrate culture