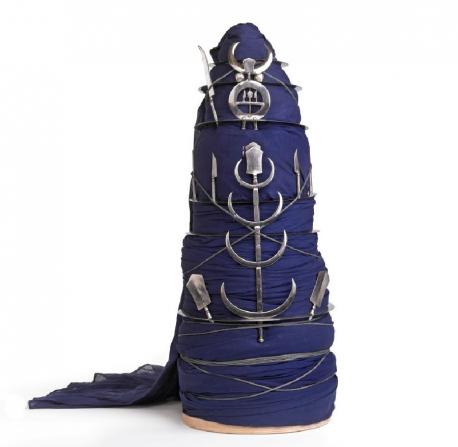 Sikh ‘Fortress Turban’ to go on display at museum

Hillingdon,London: A magnificent ‘fortress turban’ is to go on display at Birmingham Museum and Art Gallery.

It gives visitors a rare chance to explore the story of the Sikh Turban; a distinctive symbol of Sikh faith and history.

The fortress turban is on loan from the British Museum following a successful exhibition at the Museum in 2011.

This Turban is known as a Dastaar Boonga or turban fortress worn by a group of skilled warrior Sikhs called Akali Nihangs.

It was used to protect the head in battle and to hold their weapons, including daggers, swords and metal throwing discs.

The exhibition, which runs from 26 January – 28 April 2013, is on tour from the British Museum and will also include contributions from Birmingham’s Sikh community explaining why the turban remains important to them today.

The tall conical structure of the turban is like that of a tower or fortress. This made it effective in battle, protecting both the hair and head from sword blows. It is tied by entwining the long hair with the turban cloth which can be up to 20 yards long.

Ornaments such as steel quoits and small daggers were secured to it by winding long lengths of plaited steel around the turban to provide further protection. Some Akali Nihangs still wear this type of turban today as a symbolic representation of this tradition.

Sikhism is a monotheistic faith founded by Guru Nanak in AD 1469.

The key principles of the faith include the belief in a Universal god and the equality of all human beings. The turban has always been integral to Sikh tradition, representing dedication to the faith and providing protection for the uncut hair.

The primary function of the Akali army was to defend Sikhism and protect the rights of local people. Sikhs were encouraged to live a wise and spiritual life while being prepared to engage in warfare to defend and protect the oppressed. This concept of ‘Saint Soldier’ remains the underlying principle of Sikhs.

Akai-Nihangs wore dark blue clothes, iron bangles around their wrists and steel quoits in their tall conical blue turbans, together with swords, daggers and tiger claws. Today the Akali Nihangs mostly exist in areas of the Punjab and still observe the original Sikh martial traditions.

The original Sikh Fortress Turban was displayed at the Banqueting House, Westminster as part of a ‘Relics of Olds Wars’ exhibition and has been in the British Museum collection since the early twentieth century. Whilst the weapons on the Turban are original, the fabric has been entirely replaced.

Speaking about the exhibition, Curator of Islamic and South Asian Arts at Birmingham Museum & Art Gallery, Dr Rebecca Bridgman said, “’We are delighted to be able to show this rare and intriguing artefact, which not only tells an international story of Sikhism but reflects on the community of Sikhs living in Birmingham and the West Midlands’.

The Sikh Fortress Turban will tour to five other UK venues from the end of April 2013 to November 2014 after display at Birmingham Museum and Art Gallery: John Orna Ornstein, Head of National Programmes at the British Museum said “The display of the fortress turban at the British Museum generated enormous interest from Sikh and wider audiences.

“We are delighted that the turban will now tour a number of venues in the UK from Bradford to Derry, and particularly pleased that the tour will begin in Birmingham, one of the UK’s most vibrant and diverse cities.

“The loan to Birmingham is one element in a strong and long-lasting partnership including exhibitions and shared expertise that we at the British Museum value enormously.”

Previous: US court to hear rights violation case against Badal on Jan 29
Next: Gurdwaras lead the way, go green