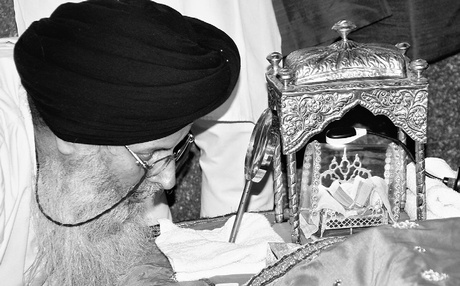 Hyderabad,India: Hundreds of devotees made a beeline to Gurudwaras in Hyderabad on Sunday to catch the glimpse of century old copies and manuscripts of Guru Granth Sahib, the revered scripture of the Sikhs. The ancient manuscripts have been put on display for the devotees to pay their respects.

Thousands of devotees thronged Gurudwara Guru Singh Sabha at Ashok Bazar and Gurudwara Saheb at Secunderabad to catch a glance of the 100-year-old Guru Granth Sahib.

One of the holy scriptures is one inch in size and contains 1,430 pages, while another, 275-year-old, was handwritten by Baba Deep Singh and Bhai Mani Singh. Another copy of the holy book which is 224-year-old was written using dyes made out of rock.

These three rare and antique versions of Guru Granth Sahib, brought from Maithan Sahib Gurudwara in Agra, are being taken around the country.

Narrating the story on how these holy scriptures reached the Agra Gurudwara, he said that in 1913 at the time of World War-I the Indian Army (then British Indian Army) was called to join the fight. During that time, soldiers of the Sikh regiment of the Indian Army said they would not go to the battleground without taking Guru Granth Sahib along with them.

Therefore, the British government for the convenience of Sikh soldiers designed the holy book during the First World War and got 13 miniatures of Guru Granth Sahib printed from a press in Germany. Each of these was one inch in size and contained 1,430 pages, which were carried by the soldiers. The soldiers were given a special lens to read the holy book. “One of these is safely kept at Gurudwara Maithan Sahib in Agra,” he said.

He said the 224-year-old holy book was made from rock dyes by two Muslim brothers in a timespan of five years seven months and three days and weighs around 28 to 30 kg.

The holy books are being taken to various places in the country to provide an opportunity for the Sikhs to learn about the history of their religion and the importance of the scripture.