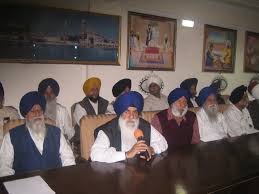 Amritsar, Punjab: The five Sikh high priests met on Monday at Akal Takht secretariat and issued directions to Shiromani Gurdwara Parbandhak Committee (SGPC) to take up the issue of release of death convict Devinder Pal Singh Bhullar with the home ministry through the state government, especially in wake of the report of the medical board.

The three-member board comprising of chairperson Dr SK Khandelwal of the All India Institute of Medical Sciences (AIIMS), and psychiatrists from Maulana Azad Medical College and GB Pant Hospital had reported that Bhullar suffered from severe depression with psychotic symptoms and suicidal tendencies.

Later talking to TOI, jathedar of Akal Takht Giani Gurbachan Singh said that, “The medical board’s report has clarified that Bhullar is suffering from serious depression and doesn’t know what is happening around him and should be released without any further delay so that he could spent rest of his life with his family” he said. He said the five high priests had directed SGPC to take up the issue with the state government to further take it up with the home ministry for the release of Bhullar.

Meanwhile, Iqbal Singh Bhatti, president, Aurore Dawn, a French based human rights organization who has been sitting on hunger strike since May 8th, said it was high time that the government should act and release Bhullar especially when he had been declared medically sick with psychotic symptoms. Bhatti, whose health is daily being monitored by a medical team of Ram Manohar Lohian Hospital said that he had lost 12 kilogram of weight.

Bhatti had begun his hunger strike after offering prayers in a Gurdwara in Paris, after which he came to India on May 18th and sat on hunger strike in front of the office of deputy commissioner, Jalandhar till May 21st and then moved on to Delhi to continue his hunger strike at Jantar Mantar.

Wife of Bhullar, Navneet Kaur expressed gratitude towards Sikh high priests for the efforts taken to save her husband. “I am hopeful that chief minister Parakash Singh will take up the issue with home minister as soon as possible,” said she.