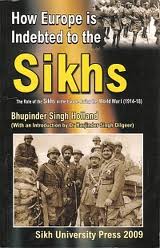 Fatehgarh Sahib, Punjab: Shiromani Gurdwara Parbandhak Committee (SGPC) president Avtar Singh Makkar today said the SGPC was in the process of sending a book, ‘Role of Sikhs in Europe during World War-I 1914-1918’, to create awareness among people living there about sacrifices made by the community. He was speaking with regard to the turban issue in Quebec state of Canada.

He said the SGPC was also proposing to send another book titled ‘Role of Sikhs in Europe during World War-II 1939-1945’ to educate the people in Quebec about sacrifices made by 83,000 Sikhs in saving the honour of men and women living in Europe during the war. He said the Canadian province, which predominantly had a French-speaking population, was trying to follow French rules ignoring the basic human rights of the minority communities there.

While taking a dig at the poor results of students in government schools of Punjab, Makkar said they would “consider” the advice of the state government for not opening any new institution in the state.

He said this after inaugurating Mata Tripta Girls Hostel, constructed at a cost of Rs 2.23 crore, at Mata Gujri College. The University Grants Commission had also issued a grant of Rs 55 lakh for the project. The SGPC presdent also laid the foundation stone of Baba Jorawar Singh Boys hostel in the college.

Makkar said students now preferred public schools over government schools. He said, “Students, not only in Punjab but across the country, are now opting for SGPC institutions due to quality education being provided here. How can we be a mute spectator to fleecing of poor students by private institutions?” The SGPC chief was commenting on the recent statement of Deputy Chief Minister Sukhbir Singh Badal in which he advised the committee to focus on spreading Sikhism instead of opening new educational institutions.

Tagged with: Role of Sikhs