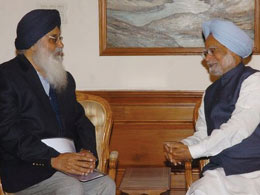 Amritsar, Punjab: The SGPC has criticised the attack on an 80-year-old Sikh at UK’s Coventry City Centre by a Caucasian teenaged girl. It has urged PM Manmohan Singh to intervene.

Talking to mediapersons, SGPC president Avtar Singh Makkar said such incidents raised questions over the security of the Sikh community in the UK. The elderly Sikh was punched in the face without any provocation.The teenager spat on him and walked away. The incident occurred on August 10.

“Even though the suspect has been arrested, the racial attack is a matter of concern as this is not the only incident of its kind. I have appealed to the Prime Minister to intervene and hold a dialogue with his counterpart in London so that such attacks do not recur,” he said. Makkar also spoke of the Oak Creek Gurdwara shootout in the US and the attack on septuagenarian Piara Singh in San Francisco, US. The SGPC president asked Sikhs abroad to take steps to sensitise the local people and officials about their religion.