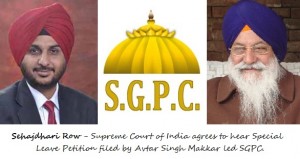 Amritsar, Punjab: The Supreme Court on Friday provided some relief to the Shiromani Gurdwara Parbandhak Committee (SGPC) by admitting its special leave petition (SLP) seeking approval of the SGPC general house which was elected following the 2011 elections. Admitting the SLP, the court, however, declined to put its stamp of approval on the September 2011 general house. In its order, the court made it clear that the SLP would be decided along with the rest of the case pertaining to voting rights of Sehajdharis (non-Sikhs who believe in principles of Sikhism and follow Sikh customs and traditions).

The case before the apex court pertains to the SGPC challenging the verdict of the Punjab and Haryana high court on allowing Sehajdharis to vote in the SGPC general elections. The All India Sehajdhari Federation led by Paramjit Singh Ranu had moved the high court, challenging a 2003 notification of the central government debarring Sehajdharis from exercising their franchise in the SGPC general elections.

Ranu had moved the court as the government did not allow Sehajdharis to vote in the September 2011 polls, which the ruling Shiromani Akali Dal (SAD) won easily. The HC ruled in Ranu’s favour, but it was silent on the legality of the 2011 elections.

In December 2012, the SGPC moved the apex court against the HC verdict. The apex court, while hearing the case, has held that the SGPC office-bearers and executive elected in November 2010 would continue to function till the final outcome of the case.

In view of this case, budget sessions of the SGPC have not taken place for the past two years. The executive has passed the annual budgets instead of the general house as the legality of the September 2011 general house is yet to be decided.

In Friday’s order, the Supreme Court ruled that the SLP and the entire case would be decided within a year. This order came after the SGPC counsel sought recognition of the 2011 house.