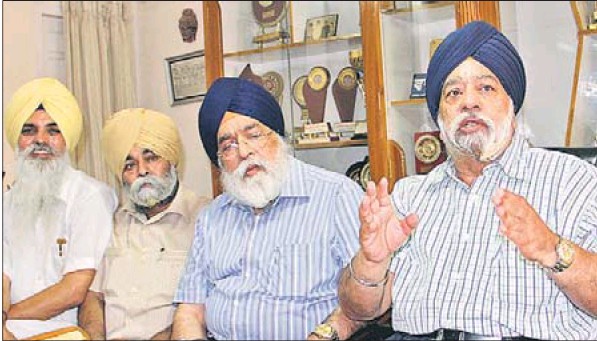 Ludhiana, Punjab: Paramjit Singh Sarna and his brother Harinder Singh Sarna of Shiromani Akali Dal, Delhi, have opposed the construction of a memorial dedicated to the victims of the 1984 Sikh genocide on the premises of at Gurdwara Rakabganj Sahib Complex near Parliament House in New Delhi, saying that the memorial is not acceptable on the gurdwara premises, and thus should be built somewhere else.

A day after Delhi chief minister Sheila Dixit stated that the Delhi Sikh Gurdwara Management Committee was within its rights to construct the memorial as long as it did not violate building by-laws, Sarna brothers – in their first appearance since their whopping defeat in Delhi gurdwara polls – on Sunday held a press conference here over the issue.

The duo maintained that as per the traditions of Sikh religion, the memorial was not acceptable within the Gurdwara Sahib complex; however if it was being built at some other site they would have no objection.

Paramjit Sarna said the memorial on the Gurdwara premises would be disrespect to the Guru, in whose memory it was laid; and thus they were objecting the memorial inside the premises.

They added that during their term of the Delhi Sikh Gurdwara Management Committee, they too had planned to a memorial on the gurdwara premises for beautification at an estimated cost of Rs 350 crore, but Manjit Singh GK spoiled it.

The brothers said that they want a memorial to be built for Sikhs who died during in the Partition in 1947.

Meanwhile, it is learnt that the foundation stone ceremony of the proposed memorial by the top SAD and BJP leaderships, including BJP president Rajnath Singh and leader of opposition Sushma Swaraj, has already been planned at Gurdwara Rakabganj Sahib Complex located near Parliament House in New Delhi.