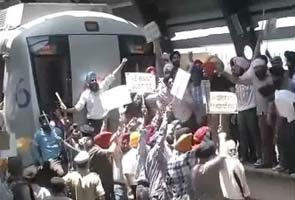 Delhi, India: Two metro stations in West Delhi were closed to commuters for some time today after protesters stormed the Subhash Nagar station, climbing on to the tracks and metro coaches. They were protesting against the acquittal of Congress leader Sajjan Kumar in a 1984 anti-Sikh riots case.

The protests are epicentred in nearby Tilak Nagar and the Tilak Nagar Metro Station was closed as a precaution. For about half an hour, metro traffic through Subhash Nagar had to be stopped as over 500 protesters crowded the station, blocking the tracks.

They also climbed metro coaches stationed there holding banners and shouting slogans. The police had to bring protesters back to the platform one by one.

Mr Kumar, who was accused of being one of the ring-leaders in the 1984 riots in which 3000 Sikhs were killed in Delhi, has been acquitted in one of three cases in which he is accused of murder and criminal conspiracy during the riots, which erupted after Prime Minister Indira Gandhi was assassinated by her two Sikh bodyguards.

Protesters have said they plan to march to Congress president Sonia Gandhi’s residence in Delhi tomorrow.

They are angry, they say, that 29 years after the riots, Mr Kumar, who was then an MP, has been acquitted of all charges in what is called the Delhi Cantonment case. Witnesses have claimed in court that they saw Mr Kumar at the spot instigating a mob which killed five Sikh men on November 2, 1984.

Five other people have been convicted in the same case.

Mr Kumar’s acquittal sparked angry scenes at the court in New Delhi too yesterday, where a Sikh demonstrator hurled a shoe in protest at the presiding judge, but missed. A witness broke down.

Activists accuse the Congress of having turned a blind eye to the killing of Sikhs and allege some city leaders such as Mr Kumar, Jagdish Tytler and H.K.L. Bhagat – who is now dead – incited mobs.