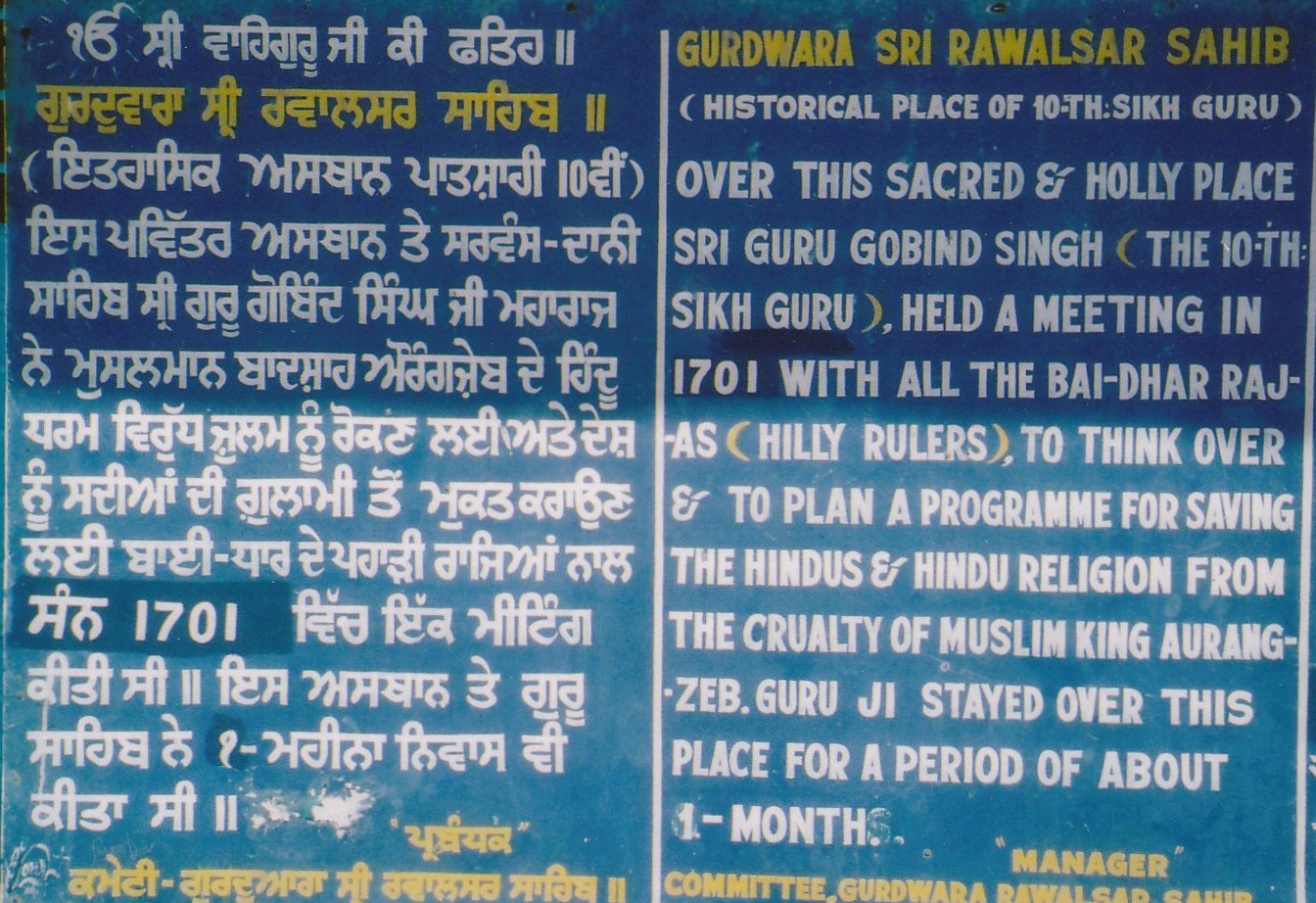 Comments Off on Rawalsar Gurdwara – its Importance 488 Views

The great historical significance of Rawalsar after Vaisakhi 1699, cannot be overstated. Perhaps that is the reason why, like the revolutionary significance of Asa ki Vaar, which was heard daily in the villages of Punjab, the message of Rawalsar too has been incrementally forgotten through politically induced amnesia! Bipran biased ritualism, worship and religious politics have taken over Sikh affairs. The “Encyclopaedia of Sikhism” by Patiala University does not even mention Rawalsar! (One senior parbandhak, responsible for Mandi and Rawalsar Gurdwaras was scathing about the attitude of our funding and publicity institutions when we visited the gurdwara.)

Guru Gobind Singh ji’s message of liberation and freedom from tyranny of Moghul rule, fell on the deaf ears of the hill rajas assembled at Rawalsar, about 15 miles from the town of Mandi in Himachal Pardesh. It is not too far north from Anandpur Sahib. That was two years after Vaisakhi 1699, when the Khalsa was revealed as Akal Purakh ki Fauj (Immortal Army of the Timeless).

The morally bankrupt pahari rajas (hill chiefs) were content to continue their lavish and lazy life styles at the expense of the poorest people in the land. Even today, despite massive subsidies by the comparatively less corrupt state government of Himachal Pardesh, and by the central government through various schemes and mega-water diversion and hydro-electricity projects, these hill people continue to scrounge around at subsistence level.

The rajas were content to pay tributes and taxes to the jihadi marauders over the mountains of the north-west frontier; and to present their daughters to the invaders at the border, while pleading with them to be spared. In the meantime, they were continually at each other’s throats. The Guru was often invited to settle their internal petty disputes.

Declaration of Guru ji’s intention to liberate the downtrodden people at Rawalsar in 1701, marked the start of the battles pre-Anandpur siege (May 1705), the great sacrifices including the four Sahibzaada, and 100 years Sikh war against all who stood against the Khalsa objective of establishment of a people’s kingdom, in which “no one inflicted pain on another” – the halemi raj predicted by Guru Arjan Dev ji (Shabad: “Hun Hukam hoa Mehrban da….”.

Commercialised, bipran (Hindutva-Brahamanwadi) politics in India today becomes apparent not only from the condition of some important historical sites like Rawalsar with a powerful Khalsa miri (temporal) message, but also from the poor and highly biased drafting of the information boards at gurdwaras like the one at Rawalsar. The powerful reminder in Punjabi of “Desh noo sadia(n) di gulami to(n) mukt kraon leyee…” i.e. to free the country (Indian subcontinent) from centuries of slavery…, is lost in the English translation; which would be read by visiting non-Sikhs including politicians. Bipran politics takes over!

Yet, gurdwaras with a heavy Bipran ritualism bias like Manikaran (north of Rawalsar) are promoted and thronged by thousands of devout Sikhs each year.

Let us move away from the mythology preaching and pilgrimages of other-worldly Manikaran and Hemkund, to educational historical preservation of places like Rawalsar, virtually taken over as a Budhist pilgrimage centre in recent years. Yet, the Raja of Mandi had allocated many acres of land to the Sikhs to sustain and mark this great Sikh historical site marking the first declaration of independence. That declaration would lead on to the independence of the Indian sub-continent from foreign rule in the 20th century.

If the great contribution of Khalsa towards the independence of the people of the Indian subcontinent is to be made known to the Indian people and the world, then the true story of Rawalsar must be memorialised and told.

Every Sikh should visit Rawalsar and see the divine reflection of Guru Gobind Singh in the lake at Rawalsar. After all, unlike the mythological Hemkund, Guru Sahib did visit the sarovar, and himself saw the reflection of the future of those who would be his own “gareeb Sikhs” leading a people’s revolution as his Khalsa, to become the rulers of the land by the end of the 18th century.

A few kilometers away from Mandi is Rawalsar. Rawalsar has a great significance, as it was sanctified by the visit of tenth Guru Gobind Singh. A Gurdwara was constructed here by Devotees of the Guru to perpetuate his memory. Adjoining the Gurdwara is a big tank, whose water has medicinal value. A dip in this tank is considered auspicious. The Gurdwara is built of stone and one can it by climbing 108 stairs. People visit this Shrine with great Devotion. It is a sacred place for Buddhists too. Many people from Tibet come here on pilgrimage, to pay homage to Buddhist Shrine situated here.

Rawalsar is a natural lake with floating islands, about 15 kilometers west of mandi town. The habitation that has grown around it is also named Rawalsar. Guru Gobind Singh visited it once on the occasion of Baisakhi festival. It was here that Raja Siddh Sen of Mandi met the Guru and took him to Mandi with him. The commemorative Sikh Shrine here is called Gurdwara Damdama Sahib. It is located on the hillside at some height from the lake and its dome is visible from a distance. Rawalsar is particularly sacred to Namdhari Sikhs. Because of some allusion to it in Sau Sakhi as a sanctuary, many Namdharis went to settle there during early 1940s, but as this small hilly place could hardly absorb them, most of them came back; yet many settled at the nearby Mandi town from where they keep visiting the lake and the Gurdwara frequently.