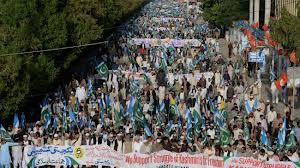 Rally to show solidarity with Kashmiris

Comments Off on Rally to show solidarity with Kashmiris 373 Views

Nankana Sahib,Pak:—A rally was organised by different religious organizations in Nankana Sahib from Purana Nankana to Goal Cakar on Kashmir Day here on Tuesday. Inspite of cold and rain hundered of men and children participated in the rally. Sikh community also welcomed the rally particpents on the gate of Gurdwara Janam Asthana, the birth place of Baba Guru Nanak, the founder of Sikh religion.

President Sikh Council Of Pakistan Sardar Mastan Singh told mediamen that being Pakistanis their hearts beat with the hearts of Kashmiris. Sikh community also showed their solidarity with Kashmiris in their struggle of freedom. The participents of the rally were carrying banners and placards on which slogans about Kashmir freedom movement were inscribed.