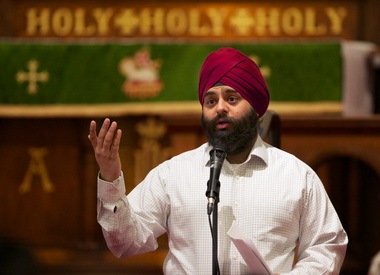 Portland-area Sikhs step out to explain their faith to others

Portland, Oregon: No sooner had three Sikhs set foot in the century-old sanctuary of St. James Lutheran Church in downtown Portland Sunday, than they were besieged with polite questions.

How old is Sikhism?

Are you any relation to Islam?

No; Sikhism is an independent faith.

As the visitors tried to get their bearings, members of their would-be audience couldn’t wait to get a few answers.

“I know very little about their faith and practice,” says Louise Kohut, nodding toward the Sikhs. The Portland woman has been attending St. James since Thanksgiving and stayed after service Sunday for the lecture. “I believe we’re all God’s children,” she adds.

St. James, a member of the Evangelical Lutheran Church in America, has sponsored the “Let the Light Shine” lecture series for more than 20 years, offering people the chance to learn about timely ideas and religious traditions. The topic this year is Sikhism.

Sikhs have been more in the spotlight since August, when a gunman walked into an Oak Creek, Wis., temple and killed six people before a police officer shot and killed him.

Portland-Vancouver Sikh community members also grieved publicly in October when their new temple, almost ready for use, burned to the ground in Vancouver. Pawneet Sethi, a spokesman for the Portland-area Sikh community, said an electrical short circuit is probably to blame, but the cause of the fire is still under investigation by the Bureau of Alcohol, Tobacco, Firearms and Explosives, which usually investigates church? fires.

Sethi, who agreed to speak at St. James, admitted before the lecture that he is a reluctant expert.

“Sikhs have never found the need of having to go out and talk about their faith,” he says. Until now. “Since 9/11 there have been many incidents, hate crimes, directed at Sikhs,” who are often mistaken for Muslims.

“Sikhs have a responsibility to talk about their faith practice with outsiders, he says, “but it’s freaking me out.”

The audience of 25 chuckled at his confession and then listened intently as he walked them through the historical roots of Sikhism. It started 500 years ago in the Punjab region of India and Pakistan. The first guru, Nanak, was born in 1469. Even as a youth, he resisted the Hindu caste system, rejected the idea of multiple gods and sought social equality despite wealth, gender and class.

“There is one creator, one embodiment, one ethereal light,” Sethi says. Sikhism is the fifth largest religion in the world with an estimated 26 million members. About 200 families worship in the original Vancouver temple, maybe 150 more in the Salem-Eugene area, he says. Sikhism doesn’t emphasize conversion, but members are on the increase. Sethi said last week that he doesn’t think recent tragedies have spurred more converts as much as the ongoing search for authentic religious expressions.

The core of Sikhism is threefold: “Meditate, work hard and honestly, and share your earnings.”

The five signs of a Sikh are uncut hair (hence the turbans), a comb to groom it with, a steel bracelet that reminds one of his or her strength, undershorts that signify chastity and a small knife or dagger to defend the innocent or oneself.

Better than it did before and immediately after Sept. 11, Sethi says.

What is your holy day?

But when do you gather?

“Singing, reading, meditating. You should come visit us in Vancouver.”

What is the meaning of wearing a maroon turban?

“My others are at the dry cleaner,” he says. “I have copper, black, navy, white — whatever goes with the slacks I’m wearing.”

2013-01-15
Guest Writer
Previous: Sarna, Badal groups target each other as poll campaign picks up
Next: Rakab Ganj Gurdwara: A leaf from history