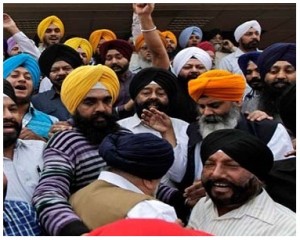 Armed police personnel were seen outside various polling booths as voters slowly but steadily trickled to caste their ballots.

“Today’s election is very important for the entire Sikh community. Sikhs all across the world, either they are sitting in America or in New Delhi, are praying that this new sect of Sikhs from Punjab, who are trying to invade the Sikh community in New Delhi, they need to be stopped. They have destroyed the sanctity of Sikhs in Punjab and I appeal to all the Sikhs in New Delhi to vote against them,” said Sarna, after casting his vote.

On the other hand, Sirsa said that they were confident of ending the tenure of Sarna as they have diminished the values of the community.

“The people are against them (Sarna) and they are supporting me. We believe that the SAD-B can revive Sikhism here, they have caused severe damage to the community, hence waves of traditional saints have come here to save the community and they cannot be stopped. An official announcement would be made on Jan.30, but the result is already decided,” said Sirsa.

The result for the election would be announced on January 31.